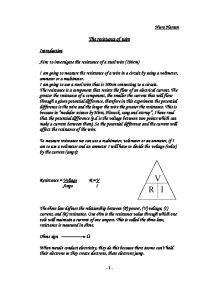 The resistance of wire

Aim: to investigate the resistance of a steel wire (100cm)

I am going to measure the resistance of a wire in a circuit by using a voltmeter, ammeter or a multimeter.

I am going to use a steel wire that is 100cm connecting to a circuit.

To measure resistance we can use a multimeter, voltmeter or an ammeter, if I am to use a voltmeter and an ammeter I will have to divide the voltage (volts) by the current (amps):

The ohms law defines the relationship between (P) power, (V) voltage, (I) current, and (R) resistance. One ohm is the resistance value through which one volt will maintain a current of one ampere. This is called the ohms law, resistance is measured in ohms.

When metals conduct electricity, they do this because there atoms can’t hold their electrons so they create electrons, these electrons jump.

Resistance is produced because if there is a thin wire, electrons have to ‘jump’ the atoms.

“The thinner the wire the less channels of electrons in the wire for the current to flow, so the energy is not spread out as much.”

Therefore the higher the resistance will be.

I am going to take 10 intervals at 10cm, this is so I can have a verity of readings and a range to work from and each time I take the results I will

Make sure the wire is at room temperature.

I predict that my graph will look like this 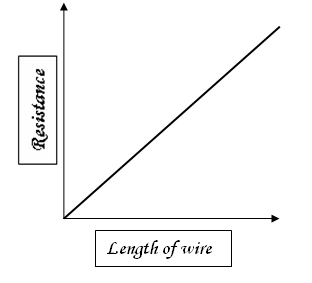 To make sure my experiment a fair test I am only going to change the length o the wire.

I am going to keep the invariable the circuit components; battery, connecting clips, multimeter, resistor (wooden stick that has a wire attached to it), and the setting on the multimeter which is 200 ohms (Ω) the same.

The reason for doing a preliminary experiment is to get an indication of the patterns that would occur in the results. Also, it was a practice so if I made any mistakes then, they could be fixed so that for the real experiment, the minimum mistakes would be made. These preliminary results are very useful as from them, I can check to see if my prediction was correct. From my actual experiment I will record the fist reading at 0mm. 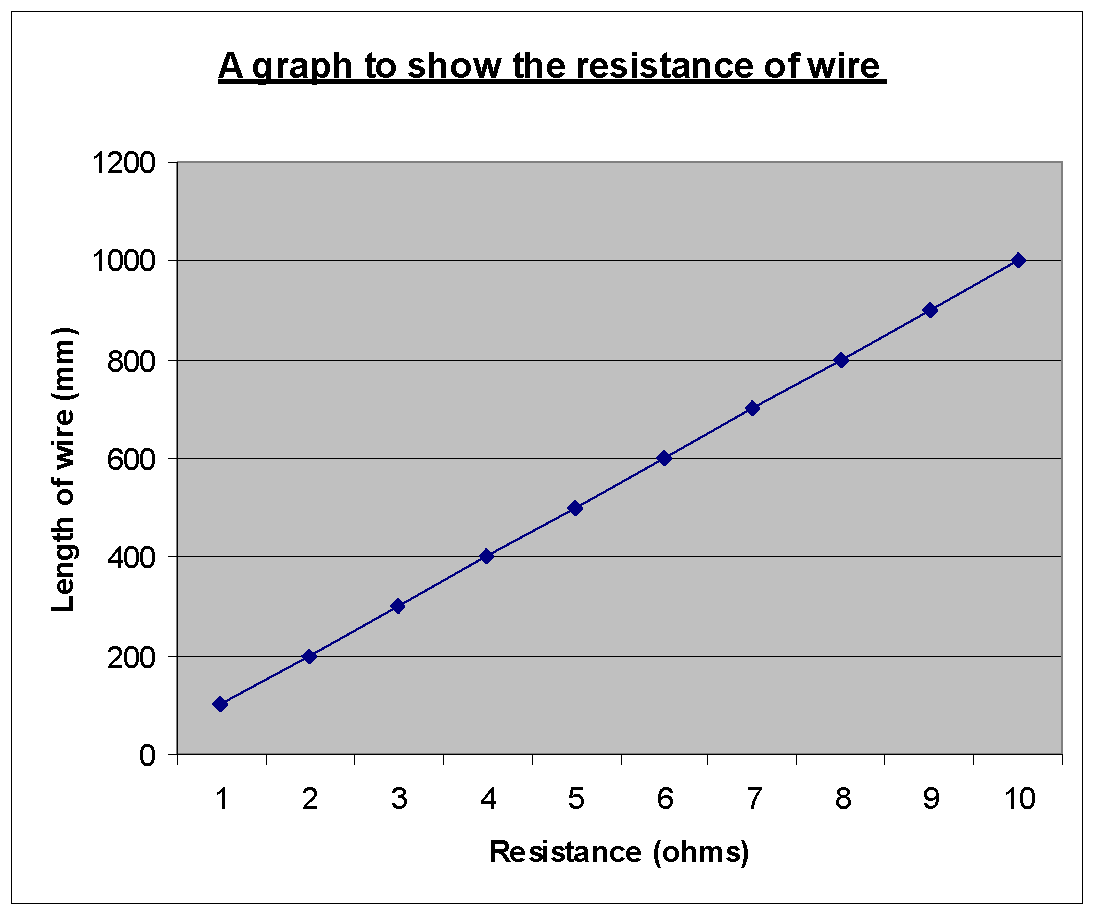 Theses were my results for my final experiment; 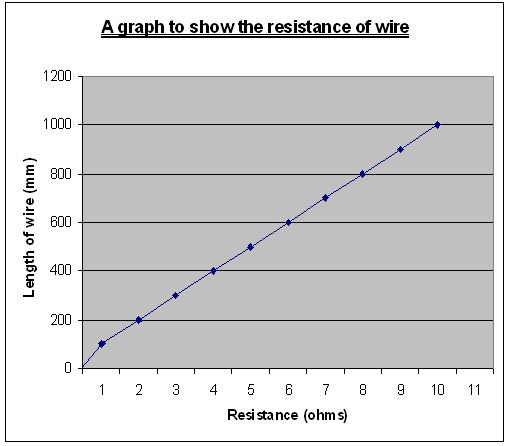 This is because of the scientific idea, shown in the planning that if you double the length of the wire, you double the number of atoms in the metal, and so doubling the ‘jumps’ causing a greater resistance: the results support my prediction well because the results turned out the way I had expected. The graph supports what I thought the graph would look like, but the only difference is that my results went exactly the same only one was different (05.2, 3Ω) and that my graph doesn’t go through the origin. This maybe because there will always be some resistance in the apparatus, during the experiment.

Measuring the lengths of the wire is also an inaccuracy as the rulers we used are not exact, and it’s difficult to get an accurate reading of the length using the eye. As the wire might not be completely straight, it may have different thicknesses throughout the wire.

And we know the thinner the wire the more resistance; (but after measuring the wire the thickness of the wire was constant at 1mm)

These would have would have been difficult to improve on as they were reasonably accurate, and there were no anomalous results. Each of my readings was the same and most of them when you double the length you would double the resistance most of the time. But if I were to do this experiment again, I would use a different micrometer (to see if there were different in widths) or I would have used an unused wire, I would also try to provide a way if possible of a wire connecting to the multimeter but not causing any resistance what so ever, also as temperature might have affected the resistance I would measure the temperature every 2 readings to see if there is a increase in temperature (then that would be part of the resistance).

The experiment was reliable in a sense that I had no obvious anomalous results yet I had a small one; at 800mm there was 05.3 and 05.2 resistance when repeated at an 800mm interval and had a reading of 05.3mm. This may have been because the temperature may have risen and added extra resistance or the apparatus may have added resistance.