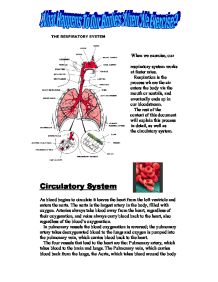 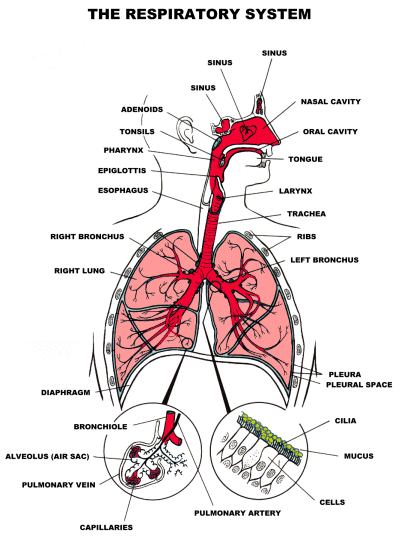 process where the air

enters the body via the

mouth or nostrils, and

eventually ends up in

The rest of the

will explain this process

in detail, as well as 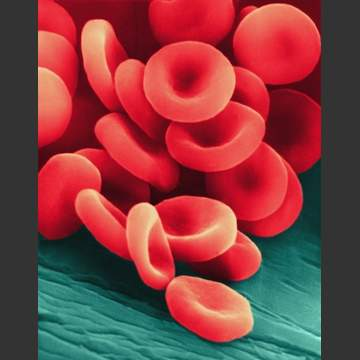 In pulmonary vessels the blood oxygenation is reversed; the pulmonary artery takes deoxygenated blood to the lungs and oxygen is pumped into the pulmonary vein, which carries blood back to the heart.

The four vessels that lead to the heart are the: Pulmonary artery, which takes blood to the brain and lungs. The Pulmonary vein, which carries blood back from the lungs, the Aorta, which takes blood around the body to capillary cells, and the Vena Cava that carries blood back from the body. As blood circulates round the body, nutrients and oxygen diffuse from the haemoglobin into cells surrounding the capillaries, and carbon dioxide diffuses into the blood from the capillary cells. The body uses the nutrients and oxygen and turns it into energy. 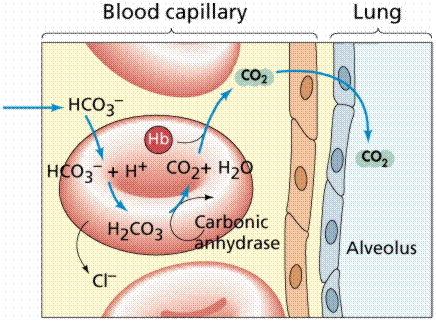 Once in the alveoli the air will pass through the walls and nutrients and oxygen attach to the haemoglobin in the red blood cells. The blood cells will then diffuse from the oxygen and nutrients into capillary cells, as it circulates. On the blood’s way back round the body it releases the excess waste that was produced shown in the diagram above. This waste goes back through the Alveoli and is breathed out via the mouth or nostrils.

When the oxygenated blood flows to the capillary cells the oxygen passes through the wall and goes to it’s designated area i.e. a muscle or the brain. This fuels the body as a form of energy. To make energy we need oxygen and glucose they combine to make this formula:

Inhalation is initiated by the diaphragm. When the diaphragm contracts, the ribcage expands. When we exhale it’s generally a passive process and the lungs recoil from the stretch of inhalation.

When we exercise, our circulatory system, respiratory system and heart, work at a faster pace. This is to supply our muscles and organs with enough energy to carry on exerting the amount of energy that you’re doing.

Because of this it means that we breathe faster, and have a faster circulation to get energy to the area of our body which is being exerted. 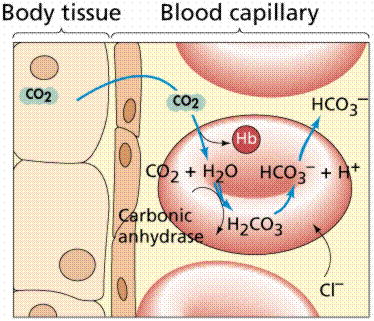 As shown in the diagram above, when we exercise exactly the same process occurs, but at a faster pace. The diagram displays the gas exchange of oxygen and other nutrients from the blood cells, being transferred to the body tissue in exchange for mainly carbon dioxide.

If you still continue after all of the glycogen has run out, then your body starts using itself for energy and eating away at its own muscles.