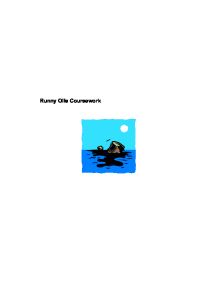 Runny Oils Coursework Aim of experiment: The aim of this experiment is to find out whether the length of the hydrocarbon chains affects how runny the oil is. Preliminary work needed: With the apparatus that is available in the school laboratory there are 2 different possible ways in which to carry out this experiment. From doing preliminary work testing both methods we hope to find out which one will give the most accurate reliable results. This will then be the experiment we carry out in the actual experiment itself. The two different methods we could use are as follows: 1. To simply take a slide, place it at an angle and drip oil down timing how long it takes to get to the bottom. 2. The other way would be to have a thin long tube filled with the oil, and timing how long it takes a small ball bearing to travel through each different oil. Preliminary results: From testing these two methods we immediately found that method 1 would be somewhat inaccurate. We found that each time we dropped oil onto the slide it took a different path every time. Therefore each different oil will be travelling a different distance. To gain any sort of accurate results the oil must travel the same distance each time. However, we found that we could make the oil go down in a straight line, but only if the slide was placed at a much greater angle. We initially tested this with the C12 oil, and with this it was fine. Then when we tried to ensure that the angle was ok for the C6 oil also we encountered problems. The oil fell down the slide so fast it was impossible to time. From the preliminary work we soon realised that method 2 would be far more accurate. From testing various different angles to place the tube at we found that 15� let the ball bearing roll through the oil at a manageable pace to be able to time it. ...read more.

We realised this from doing our preliminary work. Also as we had to take the tube out of the clamp stand each time for a different oil we made sure that the angle wasn't adjusted each time in removing and replacing the tube. To ensure this we also had a mark on the tube showing us how far to slide it back into the clamp, thus making sure the angle was kept the same. We had to take it out each time for the new oil as we found it difficult to squirt the oil in with the pipette when the tube was at a 15� angle. It wasn't impossible but throughout the preliminary work little droplets of oil were often spilled when trying to get it into the tube. In addition to this we found it a lot more accurate dropping the oil in when the tube was vertical. When dropping it in at the angle the oil left a thick residue along the bottom of the tube, this is where the ball was rolling. This would have made obtaining our evidence far less accurate if we had done it this way as each time the oil would have been laying along the bottom of the tube from top to bottom. This would have stopped the ball from picking up a small pace which is what we planned for it to do. We managed to complete the whole experiment within one lesson, this made the results that more accurate for many reasons. If we had had to set the equipment up all over again it is very unlikely that we would have got it set up identically to the first time. Below are the results we obtained:- Oil Average Time Taken For Ball Bearing To Reach Finish (seconds) C6 1.34 C8 1.94 C10 3.31 C12 4.49 C16 8.69 When carrying out the experiment we only had time in that one lesson to record 3 sets of results for each oil, instead of the original plan to do 5. ...read more.

However it is important to research this as a different angle may give more reliable results. If we could repeat the experiment I would ensure to do each oil in an ascending order, rather than testing which ever one is available. When we did this we realised that it may have some affect but not to the extent that it produced such an obvious anomalous result. There is little point in just testing C10 again as neither the tube or the ball bearings will have oily residues on them. The only way to do it is to do the experiment again, but making sure to do each oil in ascending order C6 - C16. It is obviously important that each oil is done in order starting with C6. As well as this if we did it again we could test how reliable the results actually are by testing for C14. We would then be able to see how accurate and precise not only our results are but our graphs too. Our results may also be unreliable as we left the ball bearings we rolled at the bottom of the tube each time. As we only did it 3 times for each oil there were only 2 ball bearings laying at the bottom of the tube instead of 4 which we had originally planned. We realised that if we left the ball bearings in the bottom each time it would increase the level of oil in the tube - therefore when the ball rolled down it hit the oil at an earlier stage: Although this was the case we felt that this would give more accurate results than tipping the oil out each time to get the ball from the bottom. The only way we could have made this more accurate and reliable is to find some way of getting the ball bearing out without disturbing the oil in the tube. We new from the outset that this would be a problem, and from preliminary work we found that the way we did it was the best we could do with the apparatus available. ...read more.