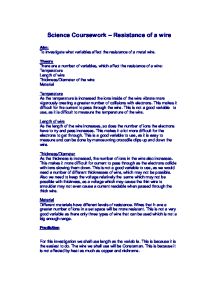 Science Coursework – Resistance of a wire

To investigate what variables affect the resistance of a metal wire.

There are a number of variables, which affect the resistance of a wire:

As the length of the wire increases, so does the number of ions the electrons have to try and pass increases. This makes it a lot more difficult for the electrons to get through. This is a good variable to use, as it is easy to measure and can be done by manoeuvring crocodile clips up and down the wire.

As the thickness is increased, the number of ions in the wire also increases. This makes it more difficult for current to pass through as the electrons collide with ions slowing them down. This is not

After research and experimentation we decided the following factors:

We will start by gathering all of the equipment. We will then set up the circuit as shown in the circuit diagram. We will then clip one crocodile clip at one end of the wire and the other at 10cm further down. We will then turn on the power pack and slowly increase the voltage to approximately 1.3v. This is perfect voltage as the wire does not over heat or create too much resistance at any point.

The results were all to a reasonable standard of accuracy. The repeat readings were similar to the original readings. All results were close to the line of best fit. There were no anomalous results during the experiment, this was due to the high level of care to ensure safety and accuracy. Extra care was taken as during he preliminary test the voltage was turned up too high and the wire overheated, singing a metre rule. This could have caused minor burns if anyone was to have touched the wire while it was at such a high temperature. If I were to redo the experiment I would take more care to ensure that the voltages were kept as similar as possible. I would also ensure that the voltages were kept low at all times, this could possibly be done by adding a fuse wire which would burn out and break the circuit if the current got too high. If I were to extend the investigation I could look at the resistances of other metals such as copper and nichrome. I could also look at wires with different thicknesses.