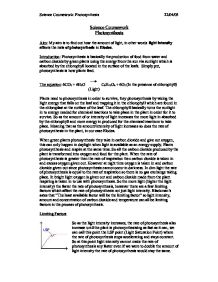 Not from the base of the lamp to the Elodea as that might not be accurate if the lamp is one of those that have an adjustable neck. I will use the same lamp to measure all of my lengths as the light intensity will always be the same at any given time in the experiment. The only thing that will change is the length from the lamp to the plant resulting in the light intensity acting on the plant to increase. Before beginning measuring my first length I will make sure that the Elodea has started photosynthesising, I will do this by first adding the Na+ HCO3- solution so that the plant has a good supply of carbon dioxide meaning that it has everything it needs to photosynthesis now. I will wait until I can see some oxygen bubbles forming meaning that photosynthesis has started taking place. So now I measure my first distance 30cm and start my stop watch. My partner will count the amount of bubbles while I keep an eye on the time as the time limit is one minute. When the time has finished then I will switch the lamp of and record our results. Then I will clear out any visible bubbles from the top of the boiling tube so that I do not mistake them for my next experiment. I will repeat the whole process 2 more times so that I can work out an average result which will be a lot more accurate. Finally I will change my distance and repeat the whole thing again with all of my lengths. The reason I choose this method was that it is a simple procedure which involves no complex apparatus. It is easy to carry out and very time efficient I also think that I can keep the other variables fairly constant so that light intensity is the only major factor and so come out with reliable and accurate results. ...read more.

Another inaccuracy was the presence of other light beside my lamp, e.g. the other student's lamps however that was a very little amount of light but I think that I could have acquired even more accurate results by maybe performing the experiment in a totally dark room where the only light affecting the Elodea was from my lamp. I did have some anomalies and I believe that they were because of those inaccuracies that I have just explained. Because of the fact that we might have missed some bubbles that were produced or the method of bubble counting not being an extremely accurate one. I could have maybe measured a lot more distances to make my experiment more accurate and so eliminate the anomalies, in other words I could have had a longer range which would of leaden me to have more results and my graphs to be more accurate. I could have also measured the time even more accurately, even though this is a small issue I think that measuring each length to exactly 2 minutes would have made my experiment more accurate and perhaps even produced results with no anomalies. However I do think that I was right to repeat the experiments 3 times each and so produce more accurate results as I had an average to work with, meaning that If I had different results when I repeated the experiments then I could find the average and so produce more accurate and reliable results. Overall I think that my experiment was a success because of the results I obtained and them fully backing up my prediction. However I do think that I could of done more and found out at which point the light intensity does not have a affect on increasing the rate of photosynthesis, meaning that I could have found out at which point a limiting factor is formed. I could have also found out how different coloured lights affected the rate of photosynthesis and found out the most efficient one this could be benefit to plant growers and farmers. ?? ?? ?? ?? Science Coursework: Photosynthesis 22/04/05 ...read more.