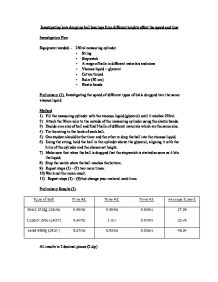 Investigating how dropping ball bearings from different heights affect the speed and time Investigation Plan Equipment needed: - 250ml measuring cylinder - String - Stopwatch - A range of balls in different materials and sizes - Viscous liquid ~ glycerol - Cotton thread - Ruler (30 cm) - Elastic bands Preliminary (1): Investigating the speed of different types of balls dropped into the same viscous liquid Method 1) Fill the measuring cylinder with the viscous liquid (glycerol) until it reaches 250ml. 2) Attach the 30cm ruler to the outside of the measuring cylinder using the elastic bands. 3) Decide on a size of ball and find 3 balls of different materials which are the same size. 4) Tie the string to the hook of each ball. 5) One student should be the timer and the other to drop the ball into the viscous liquid. 6) Using the string, hold the ball in the cylinder above the glycerol, aligning it with the brim of the cylinder and the chosen set height. 7) Make sure that when the ball is dropped that the stopwatch is started as soon as it hits the liquid. 8) Stop the watch when the ball reaches the bottom. 9) Repeat steps (1) - (7) two more times. 10) Work out the mean result. 11) Repeat steps (1) - (9) but change your material each time. ...read more.

8) Stop the watch when the ball reaches the bottom. 9) Repeat steps (1) - (8) three more times, but remember to change the volume of the glycerol. 10) Work out the mean result. Preliminary Results (3) All results are to 2 decimal places (2.d.p) In this preliminary, I used a lead ball with a diameter size of 15mm (millimeters) and dropped into the viscous liquid (glycerol) but changing the volume of the viscous liquid every time. In this preliminary the range of the results for the first two tests were fairly similar, however there is and outlier and this suggests that the experiment is quite unreliable due to implications such as the stopwatch not being pressed at the correct time. Another cause of the outlier could be that from the previous test, the glycerol was not wiped off properly and so it affected the speed of the ball. Conclusion In preliminary (1) my variable was the different materials of balls and I kept the type of viscous liquid (glycerol) and the same type of ball throughout this preliminary. The ranges of the results in this preliminary for two of the tests were quite similar which suggests that the results are reliable. However it may not be accurate as there were a few implications such as the weight of the lead ball, which was in fact heavier than the brass and copper by about 1000g, which affected its actual average speed. ...read more.

Stop the watch when the ball reaches the bottom. 8) Repeat steps (1) - (7) three more times, changing the height every time. 9) Work out the mean result. I chose to repeat the test three more times so I would have four data values, which would make the results much more accurate and reliable. I also chose to work out the mean for each result to be able to read the data properly, and since it would be the average I would be able to identify any outliers. Maintaining variables constant As the main variable is the different in height of each ball dropping, I decided to keep other variables the same, such as the size of the ball bearing, to make it a fair test. The volume of the liquid is kept constant as any change in the amount of liquid would affect the end result. To make it a fair test, any liquid lost when the ball bearing was removed would be replaced by extra viscous liquid, that way the volume of the liquid was always constant. The ball is also a constant variable in this experiment and this improves the accuracy of the collected results as it would not be affected by changes due to the use of different balls which could have slight changes in diameter and weight. Furthermore, to make the results as accurate as possible, we had the same students responsible for the stopwatch and dropping the balls as we were hoping that there would not be a huge change in reflexes. Experiment Results All results to 2 decimal places (2.d.p) ...read more.