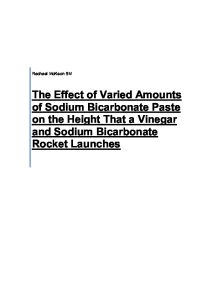 Sir Isaac Newton was one of the greatest scientists of all time. In 1686 he presented his three laws of motion. The first law stated that: Every object in a state of uniform motion tends to remain in that state of motion unless an external force is applied (csep10.phys.utk.edu). “This means that there is a natural tendency for objects to keep on doing what they’re doing. All objects resist changes in their state of motion. In the absence of an external or unbalanced force an object in motion will maintain its state of motion” (teachertech.rice.edu). Likewise, if an object is at rest (stationary) it will remain at rest without the application of an external or unbalanced force (exploration.grc.nasa.gov).

Newton’s second law stated that: The relationship between an object’s mass, its acceleration and the applied force is: F= ma (csep10.phys.utk.edu). In other words “heavy objects require more force to move the same distance as lighter objects” (teachertech.rice.edu).

Rockets incorporate all three of Newton’s laws of motion. When a rocket is sitting on its fins (pushing down on the earth) it is balanced by the earth’s equal and opposite reaction as is described in Newton’s third law (exploration.grc.nasa.gov). There is no external or unbalanced force and therefore the rocket would indefinitely stay immobile. When the rocket’s engines are ignited, thrust (unbalanced force) is added. When the weight (pushing downwards) of the rocket is less than the thrust (pushing upwards) created by the engines, the rocket accelerates upwards (exploration.grc.nasa.gov). This is explained by Newton’s first, second and third laws of motion.

Like standard rockets, the film canister rocket incorporates all three of Newton’s laws of motion. The lift off of the rocket is due to the application of an external or unbalanced force (First Law) (www.spacesociety.org). “This is the force produced when the lid blown off by the carbon dioxide gas formed in the canister. The rocket travels upward with a force that is equal and opposite to the downward force propelling the gas, and lid (Third Law). The amount of force is directly proportional to the mass of the vinegar and gas expelled from the canister and how fast it accelerates (Second Law)” (www.spacesociety.org).

Tabulated Results of the Recorded Angles

Average Height of the Rocket – ½ Teaspoon

Average Height of the Rocket – ¼ Teaspoon

Problems were encountered during the conduction of the experiment, which led to incomplete results. It was planned for the amount of sodium bicarbonate to be changed twice rather than once but certain conditions did not allow for this to occur. Sodium bicarbonate is an alkali and vinegar is an acid, and when they react together they neutralise each other creating amongst other things carbon dioxide gas. The carbon dioxide gas is the force that lifts the rocket off the ground and when a balance between the two (sodium bicarbonate and vinegar) was not reached the reaction did not create enough force to overcome the other forces acting upon the rocket, and as is stated by Newton’s first and second laws of motion, was therefore unable to propel the rocket into the air.  This furthermore prevented one teaspoon of sodium bicarbonate paste from being counted as a changed variable. Additionally, another problem that was encountered during the experiment was that the time at which the rocket launched could not be controlled. It was unknown when the rocket would launch into the air and this consequently made the angles of elevation very hard to measure and very inaccurate.

Errors were additionally experienced during the course of the experiment despite the caution that was taken to avoid them. The accuracy of the angles recorded by the clinometer was not high. It was difficult to measure the exact angles of elevation from the person measuring, to the maximum height that the rocket reached, as it could not be predicted when the rocket would launch. Parallax error was additionally experienced while measuring the amounts of vinegar and sodium bicarbonate due to the measuring equipment not being read from straight on. This in addition detracts from the accuracy of the experiment. Additionally, the results are only an approximation as rounding occurred during the trigonometry calculations.

To improve the accuracy, reliability and validity of this experiment it is important to have multiple trials before the conduction of the experiment to discover which amounts of sodium bicarbonate paste are likely to propel the rocket into the air. Additionally, obtaining an estimate as to when the rocket would launch and taking precautions to prevent inaccuracy in the measurements of the sodium bicarbonate and vinegar would improve the reliability and accuracy of the experiment.

In conclusion it was found that the amount of sodium bicarbonate paste that was added to a vinegar and sodium bicarbonate rocket did have an affect on the height that it was able to reach after being launched. It was additionally found that the rocket was able to reach the greatest height of 7.30 metres with a quarter of a teaspoon of paste, and gained no height with one teaspoon. This proved the hypothesis to be incorrect.