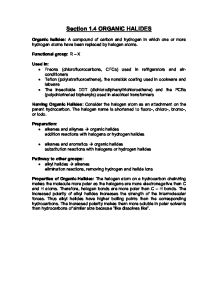 Section 1.4 ORGANIC HALIDES Organic halides: A compound of carbon and hydrogen in which one or more hydrogen atoms have been replaced by halogen atoms. Functional group: R - X Used in: * Freons (chlorofluorocarbons, CFCs) used in refrigerators and air-conditioners * Teflon (polytetrafluoroethene), the nonstick coating used in cookware and labware * The insecticide DDT (dichlorodiphenyltrichloroethane) and the PCBs (polychlorinated biphenyls) used in electrical transformers Naming Organic Halides: Consider the halogen atom as an attachment on the parent hydrocarbon. The halogen name is shortened to fluoro-, chloro-, bromo-, or iodo. Preparation: * alkenes and alkynes --> organic halides addition reactions with halogens or hydrogen halides * alkanes and aromatics --> organic halides substitution reactions with halogens or hydrogen halides Pathway to other groups: * alkyl halides --> alkenes elimination reactions, removing hydrogen and halide ions Properties of Organic Halides: The halogen atom on a hydrocarbon chain/ring makes the molecule more polar as the halogens are more electronegative than C and H atoms. Therefore, halogen bonds are more polar than C - H bonds. The increased polarity of alkyl halides increases the strength of the intermolecular forces. Thus alkyl halides have higher boiling points than the corresponding hydrocarbons. The increased polarity makes them more soluble in polar solvents than hydrocarbons of similar size because "like dissolves like". Section 1.5 ALCOHOLS and ETHERS Alcohol: An organic compound characterized by the presence of a hydroxyl functional group; R - OH Preparation: * alkenes --> alcohols addition reaction with ...read more.

A molecule of water is eliminated and the remaining portions of the two alcohol molecules combine to form ether. This type of reaction, in which two molecules interact to form a larger molecule with a loss of a small molecule such as water, is called a condensation reaction. Section 1.6 ALDEHYDES and KETONES Aldehyde: An organic compound characterized by a terminal carbonyl functional group; that is, a carbonyl group bonded to at least one H atom. Ketones: An organic compound characterized by the presence of a carbonyl group bonded to two carbon atoms. Functional group: >C = O, carbonyl group * aldehydes: * ketones: Preparation: * primary alcohols --> aldehydes controlled oxidation reactions * secondary alcohols --> ketones controlled oxidation reactions Pathways to other groups: * aldehydes --> primary alcohols addition reaction with hydrogen: hydrogenation * ketones --> secondary alcohols addition reaction with hydrogen: hydrogenation Properties of Aldehydes and Ketones Aldehydes and ketones have lower boiling points than analogous alcohols, and are less soluble in water than alcohols; this is to be expected as they do not contain -OH groups and so do not participate in hydrogen bonding. However, the carbonyl group is a strongly polar group due to the four shared electrons in the double C=O bond. Thus, aldehydes and ketones are more soluble in water than are hydrocarbons. The ability of these compounds to mix with both polar and non-polar substances makes them good solvents. ...read more.

bonded to a nitrogen atom. Functional groups: * amines: * amides: Preparation: * amines: RX + NH3 --> amine + HX RX + R2NH --> amine + HX Reactions: amine + carboxylic acid --> amide + H2O (condensation reaction) amide + H2O --> carboxylic acid + amine (hydrolysis reaction) Properties of Amines Amines have higher boiling and melting points than hydrocarbons of similar size, and the smaller amines are readily soluble in water. This can be explained by two types of polar bonds in amines: the N - C bonds and any N - H bonds. These bonds are polar because N is more electronegative than either C or H. These polar bonds increase intermolecular forces of attraction, and therefore, higher temperatures are required to melt or to vaporize amines. Where N - H bonds are present, hydrogen bonding also occurs with water molecules, accounting for the high solubility of amines in water. Since N - H bonds are less polar than O - H bonds, amines boil at lower temperatures than alcohols at similar size. Properties of Amides Amides are weak bases, and are generally insoluble in water. However, the lower-molecular-weight amides are slightly soluble in water because of the hydrogen bonding taking place between the amides' polar N - H bonds and water molecules. Amides whose N atoms are bonded to two H atoms have higher melting points and boiling points than amides that have more attached alkyl groups, this can also be explained by increased hydrogen bonding, requiring higher temperatures for vaporization. ...read more.