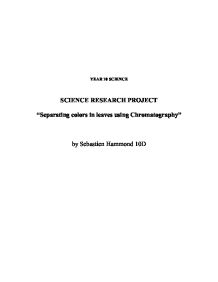 YEAR 10 SCIENCE SCIENCE RESEARCH PROJECT "Separating colors in leaves using Chromatography" by Sebastien Hammond 10D INTRO: Chromatography is a technique that is used to separate the substances present in a mixture. It is also widely used to determine the identity of a substance; particuly organic compounds. In paper chromatography absorbant paper, in this case filter paper, is used as the stationary phase. A solution of the sample that is to be analysed, in this case leaves and leaf mixtures, is made up and placed onto one end of the paper as a small spot of the mixture. The position of the spot is known as the 'origin'. For paper chromatography the components of a mixture can be identified by the distance they travel along the stationary phase compared to the distance travelled by the solvent, in this case isopropyll. This is known as the Rf value and is expressed as. Distance moved from origin by mixture Rf = Distance moved from origin by solvent Each component has a characteristic Rf value for the conditions under which the chromatogram was obtained. ...read more.

The worse performer was Manchurian pear.It moved only 1 cm and changed by spreding itself out, which indicates that the compounds found in Manchurian pear leaves are weak, thus only alloing the sample to travel a short distance. Whereas the Maple compounds are strong, allowing the sample to move further distances, retain similar shape and more dominant in colour. Azalea was another of the lesser performers , by moving only 2 centimetres. I am not surprised by this as the leaves were very soft and , along with the Manchurian Pear, was very easy to crush into a paste when placed on filter paper. CONCLUSION It seems that when too organic compounds are mixed, they don't really mix to form another mixture, they just stick together and still retain many of their original features. It also appears that some compounds found in various leaves are stronder than others, allowing them to travel further in the chromatographic process and rise over other colours once mixed ACKNOWLEDGEMENTS: * Vandalay industries for their plant leaves. ...read more.