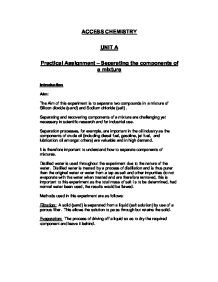 Separating the compenents of a mixture

ACCESS CHEMISTRY UNIT A Practical Assignment - Separating the components of a mixture Introduction Aim: The Aim of this experiment is to separate two compounds in a mixture of Silicon dioxide (sand) and Sodium chloride (salt). Separating and recovering components of a mixture are challenging yet necessary in scientific research and for industrial use. Separation processes, for example, are important in the oil industry as the components of crude oil (including diesel fuel, gasoline, jet fuel, and lubrication oil amongst others) are valuable and in high demand. It is therefore important to understand how to separate components of mixtures. Distilled water is used throughout the experiment due to the nature of the water. Distilled water is treated by a process of distillation and is thus purer than the original water or water from a tap as salt and other impurities do not evaporate with the water when treated and are therefore removed, this is important to this experiment as the total mass of salt is to be determined, had normal water been used, the results would be flawed. Methods used in this experiment are as follows: Filtration: A solid (sand) is separated from a liquid (salt solution) by use of a porous filter. This allows the solution to pass through but retains the solid. ...read more.

The above diagram demonstrates how the sand was separated using filtration. Taken from http://www.chemsoc.org/pdf/learnnet/rsc/Kev1-10.pdf#search=%22separating%20sand%20and%20salt%20%22 * A small amount of distilled water was used to rinse out the final grains of sand from the 500cm3 beaker and poured into the filter. * The filter paper was then removed and placed on the watch glass, each student wrote their initials on the paper and put the watch glass with filter paper in the oven to dry it. * Whilst the filter paper and contents were drying in the oven, the Bunsen burner was turned to a blue flame and the 250cm3 evaporating basin was placed on the gauze and heated until nearly half of the contents of the evaporating basin container had evaporated. The above diagram shows how evaporation took place and how the equipment was arranged to achieve this. Taken from http://www.chemsoc.org/pdf/learnnet/rsc/Kev1-10.pdf#search=%22separating%20sand%20and%20salt%20%22 * When the water had almost all evaporated, the Bunsen burner was turned to a yellow flame and set to one side and the water was allowed to evaporate by itself. * When the filter paper with sand had dried it was removed from the oven. * An empty filter paper was placed on the balance and a note was made of its mass. * The dried filter paper with the sand was then placed on the balance and the mass was recorded. ...read more.

Should the experiment be repeated, these errors could be minimised by the following methods: * Whilst the salt is heating, a cover could be placed over the evaporating dish with a hole and some kind of tubing to allow the steam to escape but prevent loss of salt. * The sand particles in the beaker could be further washed out by distilled water; however there would still be a margin or error that could not be avoided. * Careful scraping of the sand from the filter paper using a spatula could minimise the percentage loss of sand that remained ingrained into the filter paper but again, there would still be a margin of error that could not be avoided. * A larger volume of distilled water could be used and it heated for longer to ensure that the salt had dissolved into the water. * Measurements could be made three times and an average reading taken to reduce errors, the number of measurements made should also be minimised so as not to add the errors together such as weighing sand then sand and paper, then sand and paper and watch glass etc. In this case, even with the minimum number of measurements made and averages taken, a margin of error will still be there. It is best to use a balance with the smallest margin of error quoted by manufacturers. ...read more.