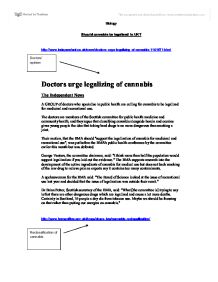 Should cannabis be legalised in the UK?

Should cannabis be legalised in UK? http://www.independent.co.uk/news/doctors-urge-legalising-of-cannabis-1101671.html Doctors urge legalizing of cannabis The Independent News A GROUP of doctors who specialise in public health are calling for cannabis to be legalized for medicinal and recreational use. The doctors are members of the Scottish committee for public health medicine and community health, and they argue that classifying cannabis alongside heroin and cocaine gives young people the idea that taking hard drugs is no more dangerous than smoking a joint. Their motion, that the BMA should "support the legalization of cannabis for medicinal and recreational use", was put before the BMA's public health conference by the committee earlier this month but was defeated. George Venters, the committee chairman, said: "I think more than half the population would support legalization if you laid out the evidence." The BMA supports research into the development of the active ingredients of cannabis for medical use but does not back smoking of the raw drug to relieve pain as experts say it contains too many contaminants. A spokeswoman for the BMA said: "The Board of Science looked at the issue of recreational use last year and decided that the issue of legalization was outside their remit." Dr Brian Potter, Scottish secretary of the BMA, said: "What [the committee is] trying to say is that there are other dangerous drugs which are legalized and cause a lot more deaths. ...read more.

"In 1839, W.B. O'Shaughnessy, MD., a thirty-year-old graduate of the medical school in Edinburgh, under service to the British East India Company, published his monograph 'On the Preparation of the Indian Hemp, or Gunjah.' This marked the introduction of hemp into conventional 19th Century western medicine. O'Shaughnessy's monograph provided a summary of all the knowledge available to him and reviewed his experiments with animals before he performed human experiments with diseases, including rheumatism, cholera, rabies and tetanus. Some seven years before, at the end of his medical training in Scotland, O'Shaughnessy invented intravenous fluid and electrolyte replacement therapy during a cholera epidemic. In the years following his hemp research, he went on to publish a pharmacopeia of Indian medicines. He then changed careers, becoming an engineer, and brought the telegraph to India, a service for which he was knighted. He then returned to England, changed his name, and was married three times before dying at the age of eighty-one." (The Marijuana Papers, ed. Mikuriya, 1973) The use of cannabis derivatives for medicinal purposes spread rapidly throughout Western medicine, as is shown in the report of the Committee on Cannabis Indica of the Ohio State Medical Society, published in 1860. In that report physicians told of success in treating stomach pain, childbirth psychosis, chronic cough, and gonorrhea with hemp products.(8) A Dr Fronmueller, of Fuerth, Ohio, summarized his experiences with the drug as follows: I have used hemp many hundred times to relieve local pains of an inflammatory as well as neuralgic nature, ...read more.

Sedative/Analgesic. The older work suggests that cannabis, in addition to its sedative action, has a specific pain-relieving effect. This has been confirmed by modern research on animals, in which cannabinoids have produced effects comparable to morphine, and in cancer and surgery patients. It also seems that they have value in combating fever and inflammation as suggested by U.S. Defence Department studies. 2. Anti-depressant. Since the 1950s(45,46) there has been only one study using THC, which was not encouraging(89). More work in this area may still be justified(82). 3. Migraine/Headache/Neuralgia. In this area, where cannabis was once the standard treatment(27), there seems to have been no modern follow up at all. 4. Cough suppressant. The nineteenth century observations have been confirmed in modern animal studies. 5. Childbirth. The use of cannabis in childbirth is traditional in Southern Africa and elsewhere. The sedative and analgesic effects are clearly relevant; it has also been suggested that uterine contractions are directly stimulated. 6. Antihypertensive. The use of cannabis in treatment of high blood pressure has been suggested; the effect is related to that on intraoccular pressure. 7. Anaesthesia. Cannabis is a sedative and potentiates the action of a number of anaesthetics, suggesting a possible application in premedication. 8. Cancer treatment. Apart from the well-established use in connection with chemotherapy, and the possible use as an analgesic, both discussed above, there is a rather speculative possibility that the direct anti-tumour effect of some of the cannabinoids may be clinically useful. http://home.freeuk.net/don-aitken/canmed1.html ?? ?? ?? ?? Biology ...read more.