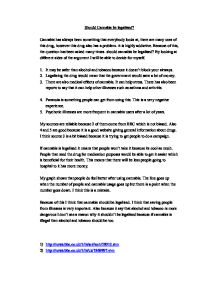 Cannabis has always been something that everybody looks at, there are many uses of this drug, however this drug also has a problem- it is highly addictive. Because of this, the question has been asked many times- should cannabis be legalised? By looking at different sides of the argument I will be able to decide for myself.

My sources are reliable because 2 of them come from BBC which is not biased. Also 4 and 5 are good because it is a good website giving general information about drugs. I think source 3 is a bit biased because it is trying to get people to do a campaign.

If cannabis is legalised it means that people won’t take it because its cool as much. People that need the drug for medication purposes would be able to get it easier which is beneficial for their health. This means that there will be less people going to hospital to it has more money.

My graph shows that people do feel better after using cannabis. The line goes up when the number of people and cannabis usage goes up but there is a point when the number goes down. I think this is a mistake.