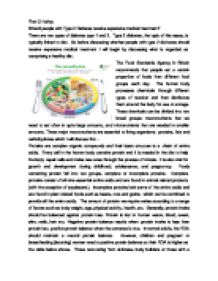 Finn O Hurley Should people with Type 2 Diabetes receive expensive medical treatment? There are two types of diabetes type 1 and 2. Type 2 diabetes, the topic of this essay, is typically linked to diet. So before discussing whether people with type 2 diabetes should receive expensive medical treatment I will begin by discussing what is regarded as comprising a healthy diet. The Food Standards Agency in Britain recommends that people eat a certain proportion of foods from different food groups each day. The human body processes chemicals through different types of reaction and then distributes them around the body for use or storage. These chemicals can be divided into two broad groups: macronutrients that we need to eat often in quite large amounts, and micronutrients that are needed in smaller amounts. Three major macronutrients are essential to living organisms: proteins, fats and carbohydrates which I will discuss first.. Proteins are complex organic compounds and their basic structure is a chain of amino acids. Every cell in the human body contains protein and it is needed in the diet to help the body repair cells and make new ones through the process of mitosis. It is also vital for growth and development during childhood, adolescence, and pregnancy. Foods containing protein fall into two groups, complete or incomplete proteins. Complete proteins consist of all nine essential amino acids and are found in animal related products (with the exception of soyabeans). Incomplete proteins lack some of the amino acids and are found in plant related foods such as beans, nuts and grains which can be combined to provide all the amino acids. The amount of protein we require varies according to a range of factors such as body weight, age, physical activity, health, etc. Generally, protein intake should be balanced against protein loss. Protein is lost in human waste, blood, sweat, skin, nails, hair etc. ...read more.

I also don't know if this data is for everyone in America or just a certain region of America, to deal with that issue I would test a broad sample of people from a representative range of areas. In the UK there are 2.8 million people with diabetes and an estimated further 850,000 who have the condition but are unaware of it. It is a condition whereby the amount of glucose in the blood is too high because: * Either the pancreas does not produce any insulin (which is a hormone and a protein) * or it does not produce enough, * Or the insulin that is produced does not work properly With the result that the body cannot make proper use of the glucose it needs as fuel. Instead, it builds up in the blood. Glucose comes from digesting carbohydrates (as described earlier). When they are digested, carbohydrates form glucose which is transported in the blood to cells where it can be converted into energy. The presence of glucose in the bloodstream alerts receptors in the blood cells to send a message to the pancreas to produce more insulin. Inside the pancreas are clusters of cells called the islets of Langerhans that produce a variety of hormones. The islets are made up of at least five different cell types, 65-85% of which are the beta cells responsible for making insulin. It is damage to the beta cells that is the most common cause of diabetes 1. Insulin controls the uptake of glucose by the cells and any excess glucose is converted into glycogen (which is insoluble, an important factor when the body is 70% water). Glycogen is stored in the liver or in fat around the body. When the body needs energy another hormone called glucagon is secreted by the pancreas to convert the glycogen back into glucose to be carried by the bloodstream for cells to use. ...read more.

The UK government says that life begins when the infant can be born alive and survives outside the womb. This is currently 24 weeks though it changes as science advances. http://en.wikipedia.org/wiki/Stem_cell_controversy#Human_potential_and_humanity Supporters of stem cell research argue that the destruction of a single embryo is justified if it provides a cure for otherwise incurable diseases in large numbers of patients. Even some pro-lifers claim that morally and religiously it is right to save existing life through embryonic stem cell therapy. However, others with more extreme moral or religious views say it is immoral to destroy a human embryo, even to save or reduce suffering in thousands of existing human lives. They believe that a soul comes into being from the moment of conception and, as such, even a zygote is one of God's creations and therefore sacred. To argue that experimenting on one life to save others is right, is to argue that the ends justify the means, which would also be condoning the experimentation on Jews by the Nazis which led to progressive outcomes for science and medicine. Opponents of stem cell research particularly those with strong religious views about God's will argue that disease is God's will in action in the world. If you contract a terminal incurable illness it is because it is your time to die. If embryonic stem cells are used in the treatment of diabetes 2 this is likely to fuel controversy even further as many people feel that diabetes 2 results from obesity, which in the popular imagination results from the life style choices of the sufferer. Genomics-what is it? What can it potentially do? How could it cure diabetes? What are the benefits and risks of this scientific advance? Are there any ethical issues? Having explained and discusse d all this go back to the original question of whether people with type 2 diabetes should receive expensive medical treatment. Implications and ethical thoughts on this, your opinion, sustained by what you have learned. ...read more.