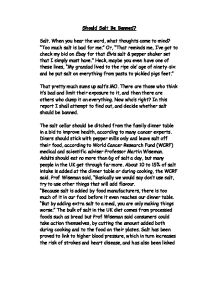 should salt be banned?

Should Salt Be Banned? Salt. When you hear the word, what thoughts come to mind? "Too much salt is bad for me." Or, "That reminds me, I've got to check my bid on Ebay for that Elvis salt & pepper shaker set that I simply must have." Heck, maybe you even have one of these lines, "My grandad lived to the ripe ole' age of ninety-six and he put salt on everything from pasta to pickled pigs feet." That pretty much sums up salt's MO. There are those who think it's bad and limit their exposure to it, and then there are others who dump it on everything. Now who's right? In this report I shall attempt to find out, and decide whether salt should be banned. The salt cellar should be ditched from the family dinner table in a bid to improve health, according to many cancer experts. Diners should stick with pepper mills only and leave salt off their food, according to World Cancer Research Fund (WCRF) medical and scientific adviser Professor Martin Wiseman. Adults should eat no more than 6g of salt a day, but many people in the UK get through far more. About 10 to 15% of salt intake is added at the dinner table or during cooking, the WCRF said. Prof Wiseman said, "Basically we would say don't use salt, try to use other things that will add flavour. "Because salt is added by food manufacturers, there is too much of it in our food before it even reaches our dinner table. "But by adding extra salt to a meal, you are only making things worse." The bulk of salt in the UK diet comes from processed foods such as bread but Prof Wiseman said consumers could take action themselves, by cutting the amount added both during cooking and to the food on their plates. Salt has been proved to link to higher blood pressure, which in turn increases the risk of strokes and heart disease, and has also been linked to stomach cancer, according to an earlier World Cancer Report Fund report (1). ...read more.

Yet getting too little iodine -- called iodine deficiency -- is a serious issue. Iodine is an essential mineral for the production of thyroid hormones. Too little iodine in a pregnant women's diet can affect the development of the fetus' brain and can cause cretinism, an irreversible form of physical and mental retardation. Iodine deficiency during infancy can also result in abnormal brain development and impaired intellectual development. "The developing brain is the most sensitive organ. Iodine deficiency doesn't make people idiots, but it does make them less smart," says Maberly. In the U.S., iodine deficiency is more common in women than men. It's also common in pregnant women and adolescents, he tells WebMD. Iodine deficiency is thought to be rare in the U.S. It's considered a problem of third-world countries, but Maberly disagrees. "Iodine Error! Bookmark not defined. in the U.S. is borderline," he tells WebMD. "A pregnant woman may not be protected. Even if she eats a normal diet, her intake is probably inadequate. Only 70% of table salt is iodine-fortified." Until nearly five years ago, Americans who got dairy, bread, and meat in their diets got plenty of iodine, he explains. Machines used in production were cleaned with an iodine disinfecting solution, so some iodine ended up in dairy, bread, meat products. That ended when companies quit using iodine disinfectant. Iodized salt is rarely found in canned, frozen, or boxed food, says Maberly. French fries and other snack foods mostly contain regular salt -- not iodized salt. In fact, Americans now get one-third less iodine than they once did, he notes. Both newborns and toddlers are affected by iodine deficiency. A recent study showed lower IQ scores among children with mild iodine deficiency -- proof that the problem exists in developed countries, writes researcher Piedad Santiago-Fernandez, MD, an endocrinologist at the Complejo Hospitalario Carlos Haya in Malaga, Spain. It's true, says Michael Karl, MD, an endocrinologist with the University of Miami School of Medicine. ...read more.

These results provide direct evidence of the harmful effects of high salt intake in the adult population." Now these dangers are clear, but arguably the biggest problem with salt is it shows up where you least expect it to. Sure, you can crack down on your habit of burying every meal in it, but, that's only half the battle. Sally Kuzemchak of Prevention magazine explains that Error! Bookmark not defined.: It's crammed into cheese slices and canned vegetables and sprinkled into cinnamon-raisin bagels and sandwich bread. You can consume a day's worth of the mineral with an order of mu shu pork with rice from your local Chinese restaurant, according to an analysis by the consumer group Center for Science in the Public Interest, in Washington, DC. As much as 80% of the sodium we get every day comes from these processed and prepared foods-not the salt shaker. Sally also points to additional research highlighting the dangers of high-sodium diets: There's also evidence to suggest that high-sodium diets may up the risk of gastric cancer. And in a small study from Colorado State University, a high-salt diet (more than 5,000 mg per day) worsened lung function in people with exercise-induced asthma, which occurs in as many as 90% of asthmatics. A low-salt diet improved it. Information like this really makes you wonder how Dr. Atkins could endorse eating salty snacks like pork rinds. Now, the concern over people's salt exposure is growing. Back in September Melanie Warner of The New York Times reported that Error! Bookmark not defined.. More from the report: Specifically, the medical association, which had never before called for regulation of a food ingredient, asked the F.D.A. to revoke salt's long-time status as a substance that is "generally recognized as safe," a classification that warrants little oversight. Instead, the F.D.A. should regulate salt as a food additive, the medical group said. If the recommendation were adopted, packaged-food companies would have to adhere to limits on allowable sodium levels for various categories of food, and speed up the search for an alternative to salt as a preservative and flavor enhancer. ...read more.