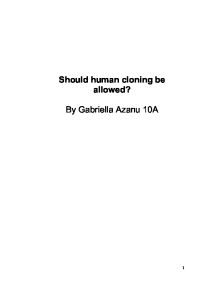 Should the cloning of humans be allowed?

Should human cloning be allowed? By Gabriella Azanu 10A Table of Contents Introduction 3 What is cloning? 3b Recombinant DNA Technology 3c Therapeutic Cloning 4b Reproductive Cloning 5a Arguments for Cloning 6 Infertility and Premature Death 7a No Risk of Genetic Disease 7b Cloning to Cure Disease? 8a Counter Arguments 8b Arguments against Cloning 9 Large Offspring Syndrome 9b Reliability of Cloning 9c Other Problems with Cloning 10a Genetic Diversity 11a Counter Arguments 11b Conclusion 12 Bibliography 14 Arguments against Cloning 16 Introduction Over the past recent years, the issue of cloning organisms has become one of the most debated subjects in science and the media. Cloning is a relatively new science which only really began with the experimental cloning of the 1950's. The first clone was created in 1952, when researchers created a cloned tadpole by transplanting the nucleus from a frog embryo into a frog's egg. However, this experiment wasn't actually meant to clone frogs but to investigate totipotent cells, cells which are able to develop into any cell type and is the foundation for multi-cellular (many celled) organisms 1. In spite of this, the scientific breakthrough came when Dolly the sheep became the first mammal to be cloned using adult cells from the udders of a female adult sheep.2 More recently, cloning has had more breakthroughs, one of these being the cloning of healthy mice from the dead brain cells of mice frozen 16 years ago, which was carried out by Teruhiko Wakayama of the RIKEN Centre for Developmental Biology in Kobe, Japan and encouraged the hope that the populations of rare or endangered species like the White Rhino could be boosted 3 With these breakthroughs of cloning, the possibility of cloning humans has become much more likely. This possibility has caused a lot of debate between those who think human cloning is the way forward and those who are worried about the scientific and ethical ramifications it would bring. ...read more.

This shortening of telomeres is linked with aging because the older the animal, the shorter its telomeres are because the animal's cells have been dividing longer. Telomere shortening may cause problems for clones because they are created through somatic nuclear transfer which starts out with "aged" DNA. Dolly the sheep had shorter telomeres than normal, which meant her cells were aging faster than that of a normal sheep.1 If humans were cloned, this problem of the shortening telomere may occur and human clones may end living a shorter life span than that of an average human. Genetic Diversity One finally argument against human cloning is the problems it causes with genetic diversity. Genetic diversity is very important to establishing and maintaining the health and wellbeing of populations of organisms. Research has shown that populations of organisms that are genetically diverse are more resilient to problems like environmental stress and at resisting disease. Cloning would create a population of genetically similar organisms and therefore exposing all organisms to greater threats of disease. An example of this in plants would be genetically identical crops that end up catching the same disease and this could then endanger food supplies. While sceptics may think this doesn't likely, efforts are already underway to archive genetically diverse strains of plants, so that unique genetic characteristics, like disease resistance aren't lost. Counter Arguments People who support human cloning, may say that it would provide those for example, who are infertile which the chance to have children who have their genetic information. However, not only does reproductive cloning as of now, create danger for the clone, it also creates danger for the mother who will be carrying the clone. Firstly, reproductive cloning needs egg cells from female animals and these animals have to be treated with large doses of fertility drugs so that ovulation can be stimulated. These drugs place enormous stress on the female's system and some scientific studies seem to imply that these drugs expose female animals to an increased risk of ovarian cancer. ...read more.

Source 11: Washington Post: Human Cloning Bid Stirs Experts' Anger Data from this source was used in my case study to make a point against human cloning. I think this source is quite reliable because it was published in the Washington Post which is a good quality newspaper akin to the Guardian or The Times in England. The author of the article has some experience in the field of biology as he took Bachelor of Science in it, though he is not a scientist but a journalist. I decided to use the article's data despite it being published 9 years ago since firstly, this data was retrieved from someone creating clones and also the data was backed up in the more recent 2007 article 'How healthy are clones and their progeny:5 years of field experience' that was published in the journal Theriogenology and showed comparable data to this source. Source 12:Theriogenology: 'How healthy are clones and their progeny:5 years of field experience' I used this source to back up another source which stated the limited effectiveness of reproductive cloning. I think this source is very reliable because it was published in a peer review journal which has a high reliability because it has been read and approved by other scientists and it also supported data from another source, which are the reasons why I included this source in my case study. Source 13: BBC: Cloning the First Human I used this source in one of my arguments against human cloning, discussing how the process of cloning itself, causes errors in the clone that could be fatal. I though this source had some reliability because firstly it was published from a documentary on BBC and this gives it some legitimacy because the BBC purpose is to be impartial and provide both points of view. I decided to use this source also because the source was paraphrased from a quote from an embryologist, Dr. Susan Avery and this makes it more reliable because she is a scientist working in a field that is part of genetics. ?? ?? ?? ?? 1 ...read more.