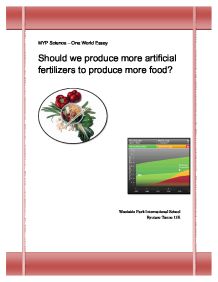 However since some of these factors can be really costly, there have been some cases of manufacturers avoiding to take care of them, which threatens local community and results in air pollution and destruction of ecosystems. On the other side of the coin, price of artificial fertilizers has been also cited as a problem. Although the Haber Process is efficient and effective method to produce ammonia, it is relatively expensive and so the artificial fertilizers. Most farmers in MEDC (More Economically Developed Countries) can generally afford for it, but current financial standard of people in developing countries, particularly ones in South Africa has not reached sufficient level to buy them. In 2002 thousands of people died Malawi, a country of South Central Africa due to food scarcities. A government report suggests that more than 430,000 tones of maize will be needed to avert the second food shortage in three years and this possibility is unavoidable unless they enhance the crop yields rapidly by intensifying the use of artificial fertilizers. However, currently this seems to be unachievable for both the locals and the government. What are the negative effect of artificial fertilizers on people and the environment? As I noted before artificial fertilizers have contributed to the world food production and in effect 40% of world's population are alive thanks to it. However, it has many negative impacts on both the environment and people. ...read more.

Considering these points, I do not believe that intensifying production of artificial fertilizers is the best way to cope with the fast growing demands for food. It is apparent that there is a high possibility of exacerbating the problems by producing more artificial fertilizers. However taking into account the fact that 40% of world's population are alive thanks to artificial fertilizers, at least we need to maintain the current quantity of its production. Following this, what can we do to catch up with the continuously swelling needs for food so as to avert the possibility of worldwide scarcity by 2050? Specifically there are two ideas. The first one is to make crops which can grow in deserts, cold districts and soils which contain a lot of salt. By doing this, we can convert grounds in which we could not cultivate, to agricultural lands. The another idea is to enhance the productivity of crops itself. Whatever happens the world population cannot grow by three times bigger than the current population. Therefore if we could increase the crop yields per a unit of area by three times it would be enough. In case that food is over-produced this way we can just use them as bio-fuels. In order to make these two ideas reality we will need to concentrate on advancement of genetic engineering and invest in the area. I believe that this is the realistically most reasonable way to overcome the world food shortages in the near future and the mission on 21st century's scientists. ...read more.