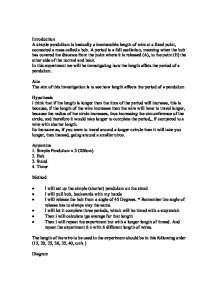 Introduction A simple pendulium is basically a inextensible length of wire at a fixed point, connected a mass called a bob. A period is a full oscilation, meaning when the bob has covered the distance from the point where it is released (A), to the point (E) the other side of the normal and back. In this experiment we will be investigating how the length affets the period of a pendulum. Aim The aim of this investigation is to see how length affects the period of a pendulum Hypothesis i think that if the length is longer then the time of the period will increase, this is because, if the length of the wire increases then the wire will have to travel longer, because the radius of the circle increases, thus increasing the circumference of the circle, and therefore it would take longer to complete the period,, if compared to a wire with shorter length. Its the same as, if you were to travel around a longer cvircle then it will take you longer, then instead, going around a smaller circe. Apparatus 1. Simple Pendulum x 5 (200cm) 2. Bob 3. Stand 4. Timer Method * I will set up the simple (shorter) ...read more.

But if you do change these variables then again your results wont be reliable no more. Or you would have to keep these changes constant through out the experiment, from the beginning. Results Conclusion As you can see from the results my hypothesis was right. If the length is greater than the the pendulum takes longer to complete a period. If you look at the 15 cm wire, you can see it takes 0.89 sec' to complete a period. Where the 20 cm wire takes 0.99 sec' and the 35cm wire takes 1.29 seconds. So you can see that the time increases as the length of the wire increases. This is because when the length is longer then the radius of the wire also increases, which makes the circumference of the circle bigger. When you have a bigger circumfernce, the pendulum has to travel longer to complete a period, but still has the same force of Gravity - 9.81 m/s. From the graph you can see that every 5 cm the period increase by a around about rate of 0.12seconds, and T^2 has a increase rate of 0.22 seconds; therefore we can conclude that T is proportional to sqrt (l), or that T^2 is proportional to the length. ...read more.

Next time i could use technology, so that i get the right timings, and the data is much more accurate. Or i could also tape the bob to the rod, and then using the scissor synchronize the stop watch and the releasation of the bob to be accuarte. It would work like this. The bob is taped, so i take a pair of scissors, and then i place the blade so that it can cut the tape and release the bob, while i place the handle of the scissors on the button of the stop watch that activates it. So as the scissors closes it cuts the tape, and comes nearer to the stop watch button. And when the scissor closes, it touches the stop watch button at the same time, as cutting the wire! Another problem that could have affected my results could be wind resistance acting upon the bob - it is insignficant but still . You would therefore have to do it in a wind free environment. One other problem was that, sometimes the bob wouldnt move straight, and wobble. To improve this you can, stretch the wire as furthest you can before you release it, and that should stop the wobbling, or otherwise take a bigger angle of release and again, stretch the wire as furthest you can before releasing it. a ...read more.