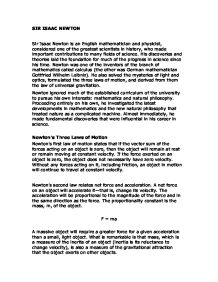 Sir Isaac Newton is an English mathematician and physicist, considered one of the greatest scientists in history, who made important contributions to many fields of science. His discoveries and theories laid the foundation for much of the progress in science since his time. Newton was one of the inventors of the branch of mathematics called calculus (the other was German mathematician Gottfried Wilhelm Leibniz). He also solved the mysteries of light and optics, formulated the three laws of motion, and derived from them the law of universal gravitation.

Newton ignored much of the established curriculum of the university to pursue his own interests: mathematics and natural philosophy. Proceeding entirely on his own, he investigated the latest developments in mathematics and the new natural philosophy that treated nature as a complicated machine. Almost immediately, he made fundamental discoveries that were influential in his career in science.

Newton's first law of motion states that if the vector sum of the forces acting on an object is zero, then the object will remain at rest or remain moving at constant velocity.

Where friction is present, Newton's second law is expanded to

Another conserved quantity of great importance is angular (rotational) momentum. The angular momentum of a rotating object depends on its speed of rotation, its mass, and the distance of the mass from the axis. When a skater standing on a friction-free point spins faster and faster, angular momentum is conserved despite the increasing speed. At the start of the spin, the skater's arms are outstretched. Part of the mass is therefore at a large radius. As the skater's arms are lowered, thus decreasing their distance from the axis of rotation, the rotational speed must increase in order to maintain constant angular momentum.