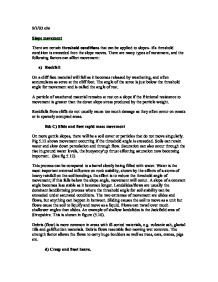 9/1/03 c/w Slope movement There are certain threshold conditions that can be applied to slopes- if a threshold condition is exceeded then the slope moves. There are many types of movement, and the following factors can affect movement: a) Rockfall On a cliff face material will fall as it becomes released by weathering, and often accumulates as scree at the cliff foot. The angle of the scree is just below the threshold angle for movement and is called the angle of rest. A particle of weathered material remains at rest on a slope if the frictional resistance to movement is greater than the down slope stress produced by the particle weight. ...read more.

Its effect is to reduce the threshold angle of movement; if this falls below the slope angle, movement will occur. A slope of a constant angle becomes less stable as it becomes longer. Landslides/flows are usually the dominant landforming process where the threshold angle for soil stability can be exceeded under saturated conditions. The two extremes of movement are slides and flows, but anything can happen in between. Sliding causes the soil to move as a unit but flows cause the soil to liquify and move as a liquid. Flows can travel over much shallower angles than slides. An example of shallow landslides is the Jackfield area of Shropshire. ...read more.

In humid climates it is rare to find surface runoff as a form of erosion this is because of the vegetation and its roots which holds the soil together and so prevents erosion. Surface run-off however does occur on dry desert like land where little or no glacial vegetation exists. Slope erosion from flowing water often begins as rainsplash where exposed soil surface impact scatters soul and clay fragments. Gradually these fragments cause the surface to become impermeable and this leads to more water flowing over the surface. In areas of limited vegetation and infiltration this leads to greater water running over the surface at greater speeds and eventually begins to pick up and erode the soil. This leads to the creation of channels called rills. Some of these rills will slowly develop into gullies. Rhys, Sophie, Tashkin, James B, Ben. ...read more.