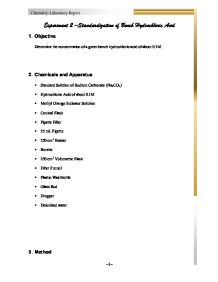 Experiment 2 -Standardization of Bench Hydrochloric Acid 1. Objective Determine the concentration of a given bench hydrochloric acid of about 0.1M. 2. Chemicals and Apparatus * Standard Solution of Sodium Carbonate (Na2CO3) * Hydrochloric Acid of about 0.1M * Methyl Orange Indicator Solution * Conical Flask * Pipette Filler * 25 mL Pipette * 250 cm3 Beaker * Burette * 250 cm3 Volumetric Flask * Filter Funnel * Plastic Washbottle * Glass Rod * Dropper * Deionized water 3. Method Hydrochloric acid is a strong acid and can react with weak base sodium carbonate according to the equation below: 2HCl + Na2CO3 --> 2NaCl + H2O + CO2 To determine the concentration of the bench hydrochloric acid, which is about 1 M, the acid is titrated against a standard sodium carbonate solution. Methyl orange is used to indicate the completion of the reaction, as its colour will change from yellow (in alkaline solution) to pale orange when the equivalence point (also known as stoichiometric point) has reached. 4. Procedure * Rinse the burette with water and then with the diluted hydrochloric acid. * Fill the burette with the acid to rinse and fill the tip. * Record the initial reading in the "Trial" column of the Results Table, and round it off to the nearest 0.05 cm3, which is approximately one drop. * Use a pipette filler to rinse the pipette with water and the sodium carbonate solution. ...read more.

Litmus paper and universal indicator are not used because they do not give sharp colour changes. In this experiment, since hydrochloric acid is a strong acid whereas sodium carbonate is a weak alkali, generally methyl orange is taken for detection of end point, as the volume required for reaching the end point and the equivalence point is about the same. In fact, as the resultant solution after the titration is a weak acid, methyl orange is very applicable to indicate the sharp colour change from yellow to pale orange. As a matter of fact, methyl orange changes from red to yellow over the pH range from 2.7 to 4.7, and it appears orange when the pH value reaches 3.7. Below shows the relationship between the pH scale and the indicators. pH Scale: 1 2 3 4 5 6 7 8 9 10 11 12 13 14 Methyl Orange Red Orange Yellow Phenolphthalein Colourless Pink Red * Difference between the end-point and equivalence point in a titration End point It is a experimental point where a sharp and obvious physical change indicates the completion of the reaction. This point is easily detectable, by colour change, electrical conductivity change, pH value change and temperature change. Equivalence point It is a point where the acid has just exactly react with the base, which means that an exactly equivalent amount of titrate has been added to the sample. ...read more.

It helped to neutralize the acidity of soil, due to acid rain and usage of acidic fertilizers, by adding limestone (calcium carbonate). Intake of Milk of Magnesia to alleviate the pain in stomach is also another common use. In addition to this, neutralization also helped to treat industrial waste before disposal and to produce fertilizer. Hydrochloric acid Hydrochloric acid is present in the stomach which acts as a sterilizer. It kills the germs which entered our body with the food bolus through the esophagus. However, concentrated hydrochloric acid is highly corrosive and must be handle in great care. Sodium chloride Commonly known that sodium chloride is table salt which act as food flavouring, it is an essential part of the diet of both humans and animals and is a part of most animal fluids. It aids digestion by providing chlorine for hydrochloric acid, a small but essential part of human digestive fluid. It is also used in other fields such as being chlorine bleach and food preservatives. A solution of sodium chloride and sodium hypochlorite is mixed to form bleaching solution which could whiten objects permanently by oxidation. However, the major use of sodium chloride is as a raw material for the production of chlorine, sodium metal, and sodium hydroxide. Historically, salt has been used as money. Besides, Chinese had already been using the method of salting to preserve food in the old days when refrigerator is not yet invented. The highly concentrated sodium chloride solution draw out all the water of microbes adhered to the food, and so the microbes become dehydrated and die in the end. ~1~ ...read more.