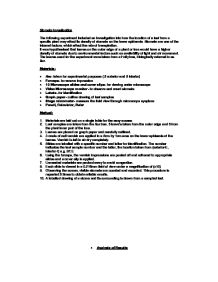 Stomata Investigation The following experiment included an investigation into how the location of a leaf from a specific plant may effect its density of stomata on the lower epidermis. Stomata are one of the internal factors, which affect the rate of transpiration. It was hypothesised that leaves on the outer edge of a plant or tree would have a higher density of stomata due to environmental factors such as availability of light and air movement. The leaves used for the experiment were taken from a Holly tree, biologically referred to as Ilex. Materials: * Ilex- taken for experimental purposes ( 5 exterior and 5 interior) * Forceps- to remove impression * 10 Microscope slides and cover slips- for viewing under microscope * Video Microscope monitor- to observe and count stomata * Labels- for identification * Graph paper- outline drawing of leaf samples * Stage micrometer- measure the field view through microscope eyepiece * Pencil, Calculator, Ruler Method: 1. Materials are laid out on a single table for the easy access 2. Leaf samples are taken from the Ilex tree. 5 leave's taken from the outer edge and 5 from the plant inner part of the tree. ...read more.

But these environmental factors can also increase the rate of transpiration through the leaf by the stomata. Such leaves would possibly have a lower density of stomata in order to reduce the effect of transpiration. Just as external factors have an effect so do internal factors like a high density of stomata in a leaf, increasing transpiration. This questions whether the interior samples which seem to have a high number of distributed stomata, encounter a greater rate of transpiration? The biological significance of the Ilex leaf can explain some of the experimental results obtained. The Ilex plant is one of many plants living in dry conditions that show adaptations able to reduce the rate of transpiration. Such plants are referred to as Xerophytes and their adaptations as Xermorphic. The Ilex is a common evergreen shrub that grows below tree level- tolerant to dim light and the shade. This factor may explain why the interior samples taken from the shady bottom of the tree had a high stomata density and more stomata than the exterior samples tested. It is able to grow in woodland conditions all year round, even in winter months (when it was taken for experiment purposes). ...read more.

The magnification used was at (x10) making the vision big for better clarity but it also meant only a small section had been viewed. If the magnification were to be larger, stomata could be observed more from a larger field view and results would both be more reliable and accurate. Another method that involves impressions of a leaf epidermis could be made using a dental-silicone impression material such as, Provil. Instead of applying nail varnish directly onto the leaf. The base and catalyst are mixed together in equal proportions then spread onto the leaf samples. The material sets rapidly and after removal can be used to prepare positive impressions using clear nail varnish. To further the investigation leaves of the Ilex tree could be taken from various growing areas and tested to see if the same hypothesis applies. Leaves could be taken according to seasons e.g. Spring- when Ilex flowers begin to bloom, and see whether seasonal changes have an influence on stomata density for both inner and outer edged leaves. The use of another plant such as the Sugar Maple tree can be investigated using a similar hypothesis and experimental method as suggested above. Or alternatively the results of the Sugar Maple could be compared to those of the Ilex tree. ...read more.