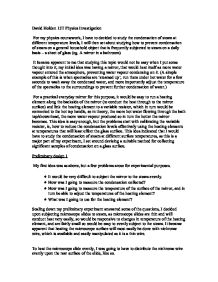 Study the condensation of steam at different temperature levels

David Holden 13T Physics Investigation For my physics coursework, I have to decided to study the condensation of steam at different temperature levels, I will then set about studying how to prevent condensation of steam on a general household object that is frequently subjected to steam on a daily basis - a sheet of glass (eg. A mirror in a bathroom) It became apparent to me that studying this topic would not be easy when I put some thought into it, my initial idea was having a mirror, that would heat itself as more water vapour entered the atmosphere, preventing water vapour condensing on it. (A simple example of this is when spectacles are 'steamed up', run them under hot water for a few seconds to wash away the condensed water, and more importantly adjust the temperature of the spectacles to the surroundings to prevent further condensation of water.) For a practical everyday mirror for this purpose, it would be easy to run a heating element along the backside of the mirror (to conduct the heat through to the mirror surface) and link the heating element to a variable resistor, which in turn would be connected to the hot tap handle, so in theory, the more hot water flowing through the bath tap/showerhead, the more water vapour produced so in turn the hotter the mirror becomes. This idea is easy enough, but the problems start with calibrating the variable resistor, ie, how to reduce the condensation levels effectively using the heating elements at temperatures that will least effect the glass surface. This idea indicated that I would have to study the condensation of steam at different surface temperatures, as this is a major part of my experiment, I set around devising a suitable method for collecting significant samples of condensation on a glass surface. Preliminary design 1 My first idea was as above, but a few problems arose for experimental purposes. ...read more.

This results in a 98.8% yield. As the amount of steam being ejected from the outlet past the condenser was negligible at 300, its same to assume that the rest of the boiled off water is condensed inside the rest of the apparatus (the condenser etc.) I worked this out to be 3.14g remaining inside the apparatus. This was not going to be easy to get out, and would waste valuable time drying the insides of all the condensing apparatus for the repeats. I decided that checking that the flow of steam would be important, if the flow of steam is constant then I think its safe to assume that the amount of condensed water inside the condenser is constant due to a constant rate of the condensed water leaving the condensed apparatus. This is a simple experiment to measure the rate of steam flow, it simply involved having the round bottomed flask filled to 100ml and put into the heating mantle, then every 5 minutes taking the round bottomed flask out to measure the change in mass due to the water evaporating. The results are as follows. Time Mass of water 0 98.15 5 98.13 10 93.28 15 82.21 20 71.82 25 60.65 30 49.65 35 38.60 40 27.59 The heating mantle can clearly be seen spending the first 10 minutes heating up the water to boiling point, in which the rate of water evaporating was non linear, but past 10 minutes the rate of evaporation can clearly be seen as linear and has the equation y = -2.189x + 115.27 As the last 30 minutes are practically completely linear, I think its safe to assume that to take the complete mass of water evaporated between 10 and 40 minutes, I can work out a fairly accurate average of mass of water boiled off each minute. 93.28 - 27.59 = 65.59 grams of water boiled off in 30 minutes 65.59 / 30 = 2 559/3000, which is approximately 2 1/5 g of water boiled off every minute. ...read more.

* As controlling the temperature of the round bottomed flask would be near impossible, I decided to just monitor the surface temperature because it would inevitable rise as the experiment proceeds, I noticed that because the flask is sealed, the hot air inside it will have nowhere to expand, so I fitted a small bit of tubing down the neck of the flask, and sealed the rest of it up with bluetac. * I also felt it important to use another temperature probe inside the boiling water to see how it affects the temperature of the probe inside the round bottomed flask This experiment is entirely dynamic, and the only problem I have is that the heating of the water with the Bunsen is not uniform, but if I keep the Bunsen at the same settings when I repeat the experiment it should not be a problem. As I was using data loggers connected to a logic live kit, it took 1800 samples, so I decided just to display the results as a graph. The results were not at all what I would have expected, although very small, there is a distinct dip in the light consistency around 200 seconds, this cannot be due to background light changing (such as people walking around) because that is more than a blip, and towards the end of the experiment, at 600 seconds there is a definite increase in light intensity. What I believe is happening at 200 seconds, is the water is finely condensed on the bottom of the flask, evenly scattering light in all directions, but as more water condenses, I believe that it forms droplets which are otherwise, miniature convex lenses which are helping to reflect light inside of the flask. I decided to improve on this, by reduce the surface area for the steam to condense on, I figured that if there is less light getting in, then the light probe inside will be more sensitive to changes in light, the bottom of the flask now looked like this. ...read more.