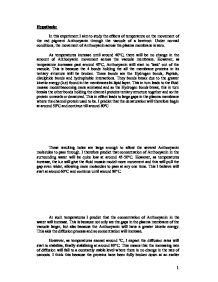 Study the effects of temperature on the movement of the red pigment Anthocyanin through the vacuole of a beetroot.

Hypothesis: In this experiment I aim to study the effects of temperature on the movement of the red pigment Anthocyanin through the vacuole of a beetroot. Under normal conditions, the movement of Anthocyanin across the plasma membrane is zero. As temperatures increase until around 40?C, there will be no change in the amount of Anthocyanin movement across the vacuole membrane. However, as temperature increases past around 45?C, Anthocyanin will start to 'leak' out of the vacuole. This is because the 4 bonds holding the all the membrane proteins in its tertiary structure will be broken. These bonds are the Hydrogen bonds, Peptide, disulphide bonds and hydrophobic interactions. They bonds break due to the greater kinetic energy (k.e) found in the membranes bi-lipid layer. This in turn leads to the fluid mosaic model becoming more animated and so the Hydrogen bonds break, this in turn breaks the other bonds holding the channel proteins tertiary structure together and so the protein unravels or denatured. This in effect leads to large gaps in the plasma membrane where the channel protein used to be. I predict that the denaturation will therefore begin at around 50�C and continue till around 80�C These resulting holes are large enough to allow the several Anthocyanin molecules to pass through. I therefore predict that concentration of Anthocyanin in the surrounding water will be quite low at around 45-50?C. However, as temperatures increase, the k.e will give the fluid mosaic model more movement and this will pull the gap even wider, allowing more molecules to pass at any one time. ...read more.

When this time has elapsed, I will remove the samples from the test tubes and place the test tubes in a rack to cool. After I have finished with the final sample, I will test the water from the first sample in a colorimeter. Whilst the completed samples are waiting to be tested in the colorimeter I will increase the set temperature the waterbath at a higher temperature, when this temperature has been achieved I will add the next samples. For the finished samples I will drain 4cm� of the water from the test tubes into a cuvette using a syringe. I will use a syringe, as it is the most accurate way of measuring volumes. I will set the colorimeter to the green filter as this has the most effective wavelength of light for measuring the transition of a red pigment. I will then calibrate the colorimeter by pressing the test button on clear distilled water. I will then test each of the samples. I will record the results into a table for comparison Method: * Set the colorimeter to the green filter * Cut the beetroot using the cork borer, set the water bath to 30�C * Cut the beetroot cylinder to 3cm� along the along its length. Wash the sample. * Boil 100cm� in a beaker using a Bunsen burner. Place 5cm� of the water into the test tubes and place into the waterbath when it has reached target temperature, add the beetroot sample * Start the stop clock and when the timer 1:30 minutes, remove the beetroot and allow 30 minutes to pass before testing. ...read more.

The most major of the issues is that we are working under the assumption that all cells in the beetroot have the same amount of Anthocyanin contained in them. Those samples taken from the edges of the beetroot for example may not have the same Anthocyanin content as those from the centre. However, to avoid this issue to a degree, all the samples I used in my experiment were taken from the same beetroot. As the plan presented here is not the plan used in the final experiment, the differences between the methods may have altered the findings. In my experiment I planned to use a water bath, however in the plan I was given it required the use of a Bunsen burner to heat the water. This meant that the water might not have been kept at a constant temperature. This would have invalidated my findings and falsified my conclusions. Another issue is that the cuvettes that have been used may have been old or stained. This may of given the impression of more Anthocyanin present than there actually was as some of the light may have been blocked by the stains on the cuvettes. Also as collective members doing the same experiment as me have pooled the results, there may have been discrepancies between the methods. As different people used different apparatus, a faulty piece of apparatus can force me to reject their results. This would not be the case if all the experiments had conducted using the same pieces of apparatus, as all the results would have the same characteristics 1 ...read more.