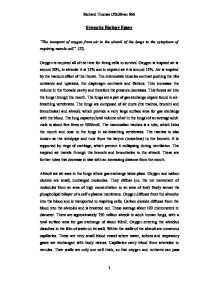 Synoptic Biology Essay - &quot;The transport of oxygen from air in the alveoli of the lungs to the cytoplasm of respiring muscle cell&quot;.

Synoptic Biology Essay "The transport of oxygen from air in the alveoli of the lungs to the cytoplasm of respiring muscle cell". (25) Oxygen is required all of the time for living cells to survive. Oxygen is inspired air is around 20%, in alveolar it is 13% and in expired air it is around 15%. Air is inspired by the vacuum effect of the thorax. The intercostals muscles contract pushing the ribs outwards and upwards, the diaphragm contracts and flattens. This increases the volume in the thoracic cavity and therefore the pressure decreases. This forces air into the lungs through the mouth. The lungs are a pair of gas exchange organs found in air-breathing vertebrates. The lungs are composed of air ducts (the trachea, bronchi and bronchioles) and alveoli, which provide a very large surface area for gas exchange with the blood. The lung capacity (total volume of air in the lungs) of an average adult male is about five litres or 5000cm3. The mammalian trachea is a tube, which links the mouth and nose to the lungs in air-breathing vertebrates. ...read more.

cell thick), and by maintaining a large concentration difference (blood always moves oxygenated blood away from lungs, and partial pressure of oxygen in alveoli is always greater than in capillaries due to breathing). At the capillaries oxygen is diffused into the blood. Blood is a suspension of cells in solution that acts as a transport medium within an animal. In humans, blood consists of about 55% by volume of plasma and 45% by volume of cells. The cells consist of red blood cells (erythrocytes), white blood cells (leucocytes) and small cell-fragments called platelets (thrombocytes). Blood has a number of important biological functions; the one in question is transport. Nutrients, such as glucose and amino acids; respiratory gases (oxygen and carbon dioxide); excretory products, such as urea; hormones, such as insulin; and heat from vasodilation/constriction are all transported in the blood. In the blood the oxygen is transported by red blood cells (erythrocytes) by an iron-containing protein called haemoglobin. Haemoglobin has a quaternary structure consisting of four polypeptide chains, each linked to a haem group. ...read more.

When the blood reaches the respiring muscles oxygen is given from oxyhaemoglobin to myoglobin. Myoglobin is an iron-containing protein found in muscle. Myoglobin consists of a polypeptide chain linked to a haem group. Its function is to store oxygen in muscle tissue for use during strenuous exercise. Myoglobin has to obtain its oxygen from haemoglobin in the blood. It therefore has a high affinity for oxygen and its oxygen dissociation curve lies to the left of that of haemoglobin. The myoglobin gives off its oxygen to the respiring cells, more importantly the organelles such as mitochondria that require it for respiration. These are found in the cytoplasm. This is the content of a cell surrounding the nucleus and enclosed by the cell surface membrane. Cytoplasm consists of organelles suspended in jelly-like matrix (cytosol), which contains enzymes and numerous small molecules, such as amino acids and nucleotides. The cytoplasm is metabolically active, being the site of glycolysis and fatty acid synthesis. Glycolysis is the initial stage of respiration where glucose is broken down into pyruvate, and the products are used in the Kreb's cycle and in the electron transport chain to produce more ATP for metabolic reactions. Richard Thomas O'Sullivan 866 1 ...read more.

This is a good essay which outlines the transport of oxygen from the alveoli to the cell. It would benefit greatly from the use of diagrams in order to reinforce the main areas. The concluding paragraph is weak and does not sum up the previous text. 3 Stars.