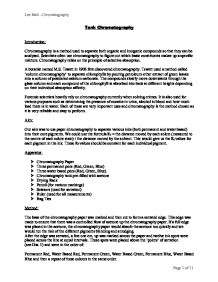 Tank Chromatography Introduction: Chromatography is a method used to separate both organic and inorganic compounds so that they can be analysed. Scientists often use chromatography to figure out which basic constituents makes up a specific mixture. Chromatography relies on the principle of selective absorption. A botanist named M.S. Tswett in 1906 first discovered chromatography. Tswett used a method called 'column chromatography' to separate chlorophylls by pouring petroleum-ether extract of green leaves into a column of powdered calcium carbonate. The compounds slowly move downwards through the glass column and each compound of the chlorophyll is absorbed into beds at different heights depending on their individual absorption affinity. Forensic scientists heavily rely on chromatography currently when solving crimes. It is also used for various purposes such as determining the presence of cocaine in urine, alcohol in blood and how much lead there is in water. Each of these are very important uses and chromatography is the method chosen as it is very reliable and easy to perform. Aim: Our aim was to use paper chromatography to separate various inks (both permanent and water based) into their core pigments. We could use the formula Rf = the distance moved by each solute (measured to the centre of each solute stain) / the distance moved by the solvent. This would give us the Rf values for each pigment in the ink. These Rf values should be constant for each individual pigment. Apparatus: > Chromatography Paper > Three permanent pens (Red, Green, Blue) > Three water based pens (Red, Green, Blue) > Chromatography tank pre-filled with acetone > Drying Rack > Pencil (for various markings) > Scissors (used for serration) > Ruler (used for all measurements) > Bag Ties Method: The base of the chromatography paper was marked and then cut to form a serrated edge. This edge was made to ensure that there was a controlled flow of acetone up the chromatography paper. ...read more.

'The standard error of a statistic is the standard deviation of the sampling distribution of that statistic. Standard errors are important because they reflect how much sampling fluctuation a statistic will show.' (http://davidmlane.com/hyperstat/A103397.html). To work out the standard error, the standard deviation must be worked out then divided by the square root of n. The formula is (? / n), n still standing for the amount of numbers in the list. When looking at the graph and table of results, the first thing I noticed was that all the permanent inks separate into two different pigments and all the water-based inks separate into only one pigment. This observation isn't consistent with the blue inks where the permanent blue only separates into one pigment and the water based separates into two. Thus for the red and green permanent inks there are two Rf values but for the blue permanent ink there is only one Rf value and the opposite way round for the water-based inks. In the case of the permanent inks, the coloured pigment closest to the original colour travels the furthest with the secondary pigment not travelling as far. Once again this doesn't apply to the blue ink as only one pigment was recorded. The pigments closer to the solvent front/further away from the original ink spot will always have a higher value than the pigments further away from the solvent front/closer to the original ink spot. This is because the solvent used was acetone, which is a non-polar solvent, if water (a polar solvent) was used the water-based pigments would have travelled further and the permanent pigments wouldn't have travelled as far. 'The polarity of the solute and solvent molecules will affect the solubility. Generally polar solute molecules will dissolve in polar solvents and non-polar solute molecules will dissolve in non-polar solvents. The polar solute molecules have a positive and a negative end to the molecule. ...read more.

Ion Exchange Chromatography - In this type of chromatography, the use of a resin (the stationary solid phase) is used to covalently attach anions or cations onto it. Solute ions of the opposite charge in the mobile liquid phase are attracted to the resin by electrostatic forces. Molecular Exclusion Chromatography - Also known as gel permeation or gel filtration, this type of chromatography lacks an attractive interaction between the stationary phase and solute. The liquid or gaseous phase passes through a porous gel which separates the molecules according to its size. The pores are normally small and exclude the larger solute molecules, but allows smaller molecules to enter the gel, causing them to flow through a larger volume. This causes the larger molecules to pass through the column at a faster rate than the smaller ones. Affinity Chromatography - This is the most selective type of chromatography employed. It utilizes the specific interaction between one kind of solute molecule and a second molecule that is immobilized on a stationary phase. For example, the immobilized molecule may be an antibody to some specific protein. When solute containing a mixture of proteins are passed by this molecule, only the specific protein is reacted to this antibody, binding it to the stationary phase. This protein is later extracted by changing the ionic strength or pH. (Introduction to Biochemical Engineering) Chromatography in general has many uses, which include: > Test water samples to look for pollution > Detecting Bombs in Airports > Identify and quantify such drugs as alcohol > Used in forensics to compare fibres found on a victim > Detecting pesticide or insecticide residues in food > Separating amino acids and anions > RNA fingerprinting > Separating and testing histamines This shows the wide variety of uses that chromatography offers and each and everyone of them benefits us even if we don't think it directly effects us. References: * AS Level Biology, Phil Bradfield, John Dodds, Judy Dodds and Norma Taylor * Class Notes * http://www.doggedresearch.com/chromo/ * http://library.thinkquest.org/ * http://www.kyantec.com/Tips/paperchromatography.htm * http://chemscape.santafe.cc.fl.us/chemscape/catofp/chromato/paper/paper.htm * http://www.rohmhaas.com/company/plabs.dir/htmldocs/PaperChroma.html * http://www.pitt.edu/~n3lsk/m-mchromproc. ...read more.