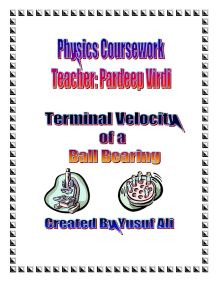 Terminal velocity of a falling ball.

In the investigation I will enquire the factors that affect the terminal velocity of a falling ball bearing in a fluid. When an object falls through a fluid it accelerates until it reaches its terminal velocity. At this speed the forces acting on it are balanced. My task is to investigate this very situation. * Stop watch * Large wide tube * Micrometer * Ball bearings * Vegetable oil (fluid) * Retort stand * Meter ruler * Thermometer * Boss * Clamp Terminal velocity of an object occurs when the opposing force is equal to the accelerating force; the net force on the object is zero. The object stops accelerating and carries on at a steady speed. (Diagram below to explain). Figure 1 Figure 2 Figure 3 In figure 1,the ball at the top is stationary the fluid resistance in terms of viscosity is zero. In figure 2 fluid resistance increases thus slowing down the rate of acceleration. In figure3 the fluid resistance balances the weight of the ball bearing hence the ball is no longer accelerating. The speed of the ball at this time is in its terminal velocity. ...read more.

If the mass and weight of the ball bearing increases it requires twice as much friction to balance the ball bearing's weight, which then increases the velocity. As the ball bearing accelerates the friction acting against the falling ball bearing increases caused by the fluid balances out the forces applied to the ball bearing, and reaches the terminal velocity. Hence my theory is the smaller the ball bearing the quicker the terminal velocity will occur and vice versa. For our own safety when through out the investigation we must: 1. During the experiment goggles will need to be worn, to protect the eyes from the boiling hot oil in case it spills out because of its temperature (bubbling). 2. Equipment should be set up away from the sides and right at the back. As we are working with fluids, the retort stand may fall causing the fluid to come out, leaving the floor slippery hence an injury 3. Long hair must be tied back for the safety of the individuals. 4. Chairs should be tucked under the tables, so nothing will block the escape route. ...read more.

Another error can be made when actually measuring the distance of the fall of the ball bearing from the large tube; this could happen if the measurements are not accurately taken from the meter ruler. So therefore the difficulties that can be encounter through out the experiment is. Trying to establish weather the ball bearing has reached terminal velocity before timing is started. Trying to maintain the temperature attained once the oil has been heated or cooled, Human errors when recording the timing, Human errors in general. Trying to hold the ball bearings just above the oil without dropping them in. Most of these errors can only depend on the individual so it would be assuring to accomplish the experiment twice to discover the errors accomplished by the investigator and such errors as the inaccurate readings will definitely occur but could be reduced by using accurate equipment but the errors will still occur. The following are the books that I have used in order to accomplish the investigation and obtained useful resources, which can be checked in the following books: - * A level physics, supplied by the college * A level advanced physics oxford revision guides ...read more.