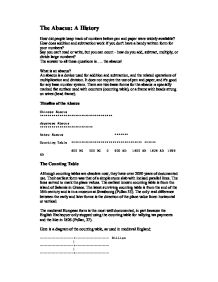 The Abacus: A History

The Russian abacus is similar in form to the Chinese or Japanese abacus, and was probably brought to Russia from China. The Russian form is set up to do calculations in rubles and kopeks. It has no horizontal divider, but some of the beads on each wire are a different color, to help as place-keepers (Pullan 100). Older Russian abaci have some additional columns for quarter kopeck as well as quarter ruble values (Leipala). If you go to Russia today, you will still see the abacus used. Ed Oswalt made this observation when he went to Russia in 1997: "The same store . . . where you can buy a Pentium computer, computes your bill using an abacus." An interesting form of the abacus was found during archeological excavations in Central America. This abacus dates to around 900 AD and is constructed from maize kernels threaded on a string, all contained within a wooden frame (Fernandes). Grado states that an abacus of this form would have 7 beads by 13 columns. Math on the Counting Table Simple mathematical calculations on either the abacus or the counting table are pretty much the same as pen and paper sums, but instead of using abstract representations of the quantity, you use counters or beads to represent a quantity, and position to represent value. ...read more.

It requires memorizing the times tables or having a second abacus to do the simple multiplication. The units column is done first. The results of the multiplication of the unit of the bottom number and the tens of the top number are stored IN THE SECOND column. Keep in mind the process of pen and paper multiplication, and the abacus presents no real difficulty. Division is done as repeated subtraction - again keeping a tally of how many times you have subtracted (Dilson 121ff). Figures 4 and 5 illustrate these 2 processes. If you would like a little challenge, try doing calculations in other number systems. The Chinese abacus is already useful for base 2 and base 16 calculations. Each rod on the Chinese abacus has 16 possible values because that was the unit of weight in China (Accent Interactive). Because of this, you can also use the Chinese abacus for hexadecimal calculation. And if you ignore the earth beads, you can use the heaven beads for binary calculations. The best way to learn about the abacus is by doing. Get a stack of pennies or buttons, clear a spot on the kitchen table and try out some sums! And as you are busily calculating away, keep in mind that you are continuing a two thousand year tradition that is still alive and well today. ...read more.