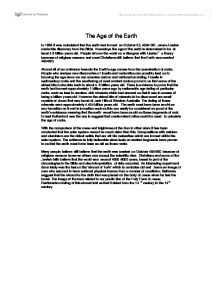 The Age of the Earth

The Age of the Earth In 1654 it was calculated that the earth had formed on October 23, 4004 BC. James Ussher made this discovery from the Bible. Nowadays the age of the earth is determined to be at least 4.5 billion years old. People all over the world now disagree with Ussher's theory because of religious reasons and most Christians still believe that the Earth was created 4004BC. Almost all of our evidence towards the Earth's age comes from the examination of rocks. People who analyse new discoveries of fossils and meteorites can possibly lead us to knowing the age since we can examine carbon and radiocarbon dating. ...read more.

However the oldest bits of minerals to be discovered are small crystals of zircon that was found at Jack Hills of Western Australia. The dating of these minerals were approximately 4.404 billion years old. The earth must have been as old as any formation on it and information such as this can easily be considered as proof of the earth's existence meaning that the earth must have been as old as those fragments of rock. Ernest Rutherford was the one to suggest that uranium/lead ratios could be used to calculate the age of rocks. With the comparison of the mass and brightness of the Sun to other stars it has been concluded that the solar system cannot be much older than this. ...read more.

Christians and some of the Jewish faith believe that the world was around 4000-6000 years, based in part of the chronologies in the Bible and also interpretation of data recorded. An interesting experiment done lately was the test on the 'shroud of Turin' which is centuries old and bears an image of man who seemed to have suffered physical trauma from a manner of crucifixion. Believers suggest that the shroud is the cloth that was placed on the body of Jesus when he had his burial. The image of the face related to our prediction of the Holy Face of Jesus. Radiocarbon dating of this shroud told us that it dated from the 13th century to the 14th century. ...read more.

The student answer the question, but with little backing of chemistry as to their conclusion. The student seems more concerned with the biblical Christian account of the age of the Earth. There is much too much claiming that other people's ...

The student answer the question, but with little backing of chemistry as to their conclusion. The student seems more concerned with the biblical Christian account of the age of the Earth. There is much too much claiming that other people's beliefs are wrong with very little backing as to why. They also starts to discuss very irrelevant things to do with the age of the Earth such as the age of the shroud of Turin. I think it would be a good idea to of first just thought of a very brief plan of what you are going to write about and then think "Is this relevant to the question at hand?"

The student's spelling, grammar and punctuation are not great and he uses little correct terminology. Their essay is quite short with most of it taken up by irrelevant points. It also does not really read like a science essay, it seems less to do with explaining the science and more just to tell Christian's that they are wrong. When writing a science essay about a subject that has people with some controversial opinions - as this clearly does- you should be careful as to not stray to far off topic and make sure to keep it about the science that you are meant to be talking about.