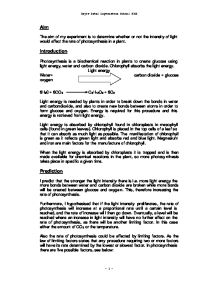 The aim of my experiment is to determine whether or not the intensity of light would affect the rate of photosynthesis in a plant.

Aim The aim of my experiment is to determine whether or not the intensity of light would affect the rate of photosynthesis in a plant. Introduction Photosynthesis is a biochemical reaction in plants to create glucose using light energy, water and carbon dioxide. Chlorophyll absorbs the light energy. Light energy Water+ carbon dioxide + glucose oxygen 6H20 + 6CO2 C6H12O6 + 6O2 Light energy is needed by plants in order to break down the bonds in water and carbondioxide, and also to create new bonds between atoms in order to form glucose and oxygen. Energy is required for this procedure and this energy is retrieved from light energy. Light energy is absorbed by chlorophyll found in chloroplasts in mesophyll cells (found in green leaves). Chlorophyll is placed in the top cells of a leaf so that it can absorb as much light as possible. The manifestation of chlorophyll is green as it reflects green light and absorbs red and blue light. Magnesium and iron are main factors for the manufacture of chlorophyll. When the light energy is absorbed by chloroplasts it is trapped and is then made available for chemical reactions in the plant, so more photosynthesis takes place in specific a given time. ...read more.

I also made sure I only changed one thing, which was the light intensity towards the plant. * I made sure that the amount of water surrounding the plant was kept equal throughout the entire investigation. Above I have shown the precautions taken in order to assure that my investigation was as fair as possible. I will now look into further detail about each specific Variable: Independent Variable: light intensity is to be varied by increasing and decreasing the distance from the light source to the plant Dependent Variable: Volume of oxygen produced (rate of photosynthesis) is to be measured by finding the volume of oxygen produced in a minute, and thus finding the rate of photosynthesis Control Variable: Light wavelength (colour) light energy is absorbed by the pigment, chlorophyll, in the leaf. Chlorophyll easily absorbs blue light, in the 400-450 nm range, and also easily absorbs red light, in the 650-700 nm range. However it does not easily absorb green or yellow light, rather it reflects them, decreasing the amount of light absorbed, and therefore the rate of photosynthesis. This can easily be controlled, simply by using the same lamp throughout the experiment. ...read more.

It would be square to stop refraction of light. This experiment not entirely fair because we could not see all the bubbles produced due to some of them being too small and some too quick, also some may have stuck underneath the plant. To trounce this I would use a gas syringe as this avoids human errors such as blinking and also allows for more accurate measurements, we would also leave the plant for longer this will allow for a fairer result. Looking at the three sets of results I would say they are fairly reliable but they is still little doubt that they're similar but could be more analogous. To surmount this I would repeat the experiment more times to have more comprisable results. Extension To extend this experiment I would use different coloured lights to see if it affected the rate of photosynthesis. I think due to the fact that chlorophyll is green it when green light is shone on a plant very little photosynthesis if any will take place, also I think that white light will give the best results. To do this experiment I will repeat as I did in the last but instead of changing the distance I will use light filters to change the colour of the light Rajiv Patel Leytonstone School 8152 - 1 - ...read more.