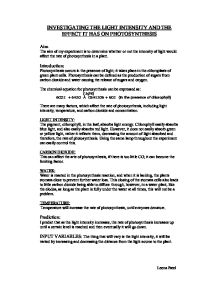 The aim of my experiment is to determine whether or not the intensity of light would affect the rate of photosynthesis in a plant.

INVESTIGATING THE LIGHT INTENSITY AND THE EFFECT IT HAS ON PHOTOSYNTHESIS Aim The aim of my experiment is to determine whether or not the intensity of light would affect the rate of photosynthesis in a plant. Introduction: Photosynthesis occurs in the presence of light; it takes place in the chloroplasts of green plant cells. Photosynthesis can be defined as the production of sugars from carbon dioxide and water causing the release of sugars and oxygen. The chemical equation for photosynthesis can be expressed as: (Light) 6CO2 + 6H2O � C6H12O6 + 6O2 (in the presence of chlorophyll) There are many factors, which affect the rate of photosynthesis, including light intensity, temperature, and carbon dioxide and concentration. LIGHT INTENSITY: The pigment, chlorophyll, in the leaf, absorbs light energy. Chlorophyll easily absorbs blue light, and also easily absorbs red light. However, it does not easily absorb green or yellow light, rather it reflects them, decreasing the amount of light absorbed and therefore, the rate of photosynthesis. Using the same lamp throughout the experiment can easily control this. ...read more.

this until you have five different distances that the light is at, waiting five minutes each time at each distance for the elodea to get settled to the light intensity and then count the amount of bubbles that come off the elodea over the period of two minutes. Place the weed into the cylinder first quite near to the lamp to encourage the weed to start photosynthesising. Fair test In order to make this experiment a fair test I will use the same elodea because if I used different elodeas the rate that one plant photosynthesises may not be the same as the other elodea. I will use the same amount of time for the elodea to settle with the light when changing the intensity of light. I will also keep the temperature the same and the amount of carbon dioxide will also be the same. Evaluation I think my experiment went well but there were a few problems. We all did this experiment alone, this way it took more longer, but working alone I find my results more accurate then if I had worked in a group as I understand fully what I had set out to do and would have to concentrate more as there is just one person doing it. ...read more.

Also while I was timing the reaction I found that the human eye is not always accurate enough to tell when the experiment had taken place. Analysis My graph was in the form of a line of best fit. I found that as light intensity increased, photosynthesis increased, this is because photosynthesis is a reaction, which needs energy from light to work. From these results I can say my hypothesis does appear to be accurate and that an increase in light intensity does in fact increase the rate of photosynthesis. As light intensity increases eventually the rate of photosynthesis does gradually decrease by enzymes being denatured. Results Bubble count Distance of lamp (cm) A B C D E 10 99 90 95 97 95 20 71 69 75 79 73 30 60 57 62 55 64 40 49 40 46 48 41 35 50 52 59 56 60 Average Distance Total For 10 min (no. Of bubbles) AVERAGE PER 2 minutes (no. Of bubbles) AVERAGE PER 1 minute (no. Of bubbles) 10cm 20cm 30cm 40cm 35cm Investigating The Light Intensity And The Effect It Has On Photosynthesis Leena Patel ...read more.