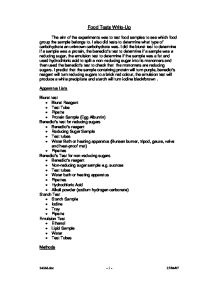 The aim of the experiments was to test food samples to see which food group the sample belongs to. I also did tests to determine what type of carbohydrate an unknown carbohydrate was.

Once the lipids have been hydrolysed, the mixture of ethanol and the lipids are decanted into a test tube of water. A white precipitate is formed on top of the water if lipids are present. This is because lipids are hydrophobic and are trying to get as far away from the water as possible. When testing for non-reducing sugars, the glycosidic bonds must be hydrolysed by hydrochloric acid before performing the benedict's test for reducing sugars. In the biuret test for proteins, the sodium hydroxide in the biuret reagent breaks the peptide bonds linking the amino acids, this allows the copper to form a coloured substance with parts of the amino acids which shows the presence of proteins. Evaluation of the tests All the tests produced result as expected, despite having trouble with testing for non-reducing sugars in the unknown carbohydrate category. This was due to an excess of hydrochloric acid in the sample and the fact that the benedict's reagent had been added before the acid had been neutralised by the sodium hydrogen carbonate. Biochemical Tests - 1 - 27/04/07 ...read more.

A four star piece of work. Excellent introduction and description of each food test given. Great accurate set of results with an excellent scientific evaluation used. Overall this is a well planned experiment which shows a good understanding of each food test and how the results are achieved.