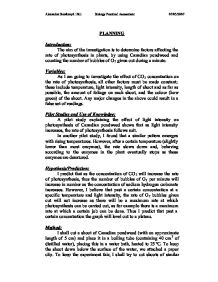 The aim of the investigation is to determine factors affecting the rate of photosynthesis in plants, by using Canadian pondweed and counting the number of bubbles of O2 given out during a minute.

PLANNING Introduction: The aim of the investigation is to determine factors affecting the rate of photosynthesis in plants, by using Canadian pondweed and counting the number of bubbles of O2 given out during a minute. Variables: As I am going to investigate the effect of CO2 concentration on the rate of photosynthesis, all other factors must be made constant; these include temperature, light intensity, length of shoot and as far as possible, the amount of foliage on each shoot, and the colour (how green) of the shoot. Any major changes in the above could result in a false set of readings. Pilot Studies and Use of Knowledge: A pilot study explaining the effect of light intensity on photosynthesis of Canadian pondweed shows that as light intensity increases, the rate of photosynthesis follows suit. In another pilot study, I found that a similar pattern emerges with rising temperatures. However, after a certain temperature (slightly lower than most enzymes), the rate slows down and, behaving according to the enzymes in the plant eventually stops as these enzymes are denatured. Hypothesis/Prediction: I predict that as the concentration of CO2 will increase the rate of photosynthesis, thus the number of bubbles of O2 per minute will increase in number as the concentration of sodium hydrogen carbonate increases. ...read more.

The formula needed for photosynthesis is this: CO2 + H2O C6H12O6 + O2 (The elements in italics are the variables, those underlined are the constants, and the other is not of direct interest to the experiment) As sodium hydrogen carbonate decomposes in water, it releases H2 (g) and CO2 (aq). This is the full equation for how sodium hydrogen carbonate decomposes: NaHCO3 + H2O ? HCO3- + H+ ? H2O + CO2 + NaOH This can be condensed to: HCO3- ? H2O + CO2 Thus I can control the amount of CO2 available for photosynthesis, because theoretically distilled water contains no dissolved gases, including CO2. I can add accurately measured amounts of NaHCO3 to 50 ml. of distilled water; allow the Canadian pondweed to equilibrate, and measure the number of bubbles produced in a minute, using the results as a crude method of the rate of photosynthesis. Diagram: OBTAINING EVIDENCE Results: The experiment was carried out under the following conditions:- Constant Temperature at 25�C Distance of light from Beaker; 10 cm. Then with altering concentrations as indicated the following results were obtained: Amount of NaHCO3 (ml) Average Number of Bubbles/Minute* 0.00 2 0.25 28 0.50 54 0.75 79 1.00 104 1.25 126 1.50 144 1.75 159 2.00 158 * The figures in the column are an average of three results taken. ...read more.

* Carry out the experiment in a dark room, so the lamp is the only source of light, as the weather conditions of the day of the experiment may have affected the results, as may have done the lighting in the laboratory, which may or may not have been on the different days that the experiments were carried out, even as far as it may have affected the pilot studies, and my predictions made from them. * Use more accurate methods of measuring the gas given off - as the bubbles could have varied in size so much that my results could be completely wrong in the way that carbon dioxide affects photosynthesis. A set up as shown below may provide a more accurate measurement of the oxygen given off during photosynthesis, but to gain a significant amount, the length of time may have to be increased. Essentially, the procedure was valid for this experiment, but grossly inaccurate. There were too many variables that could not be controlled that were mentioned above; background light, chlorophyll in the shoots, and surface area available for photosynthesis. Also, the distilled water was not pure, gases were still dissolved in it, therefore decreasing the credibility of the experiment. Alexander Boothroyd 10iii Biology Practical Assessment 07/05/2007 ...read more.