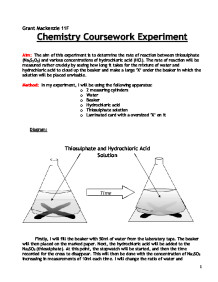 The aim of this experiment is to determine the rate of reaction between thiosulphate(Na2S2O3) and various concentrations of hydrochloric acid (HCl).

Grant Mackenzie 11F Chemistry Coursework Experiment Aim: The aim of this experiment is to determine the rate of reaction between thiosulphate (Na2S2O3) and various concentrations of hydrochloric acid (HCl). The rate of reaction will be measured rather crudely by seeing how long it takes for the mixture of water and hydrochloric acid to cloud up the beaker and make a large 'X' under the beaker in which the solution will be placed unvisable. Method: In my experiment, I will be using the following apparatus: o 2 measuring cylinders o Water o Beaker o Hydrochloric acid o Thiosulphate solution o Laminated card with a oversized 'X' on it Diagram: Firstly, I will fill the beaker with 50ml of water from the laboratory taps. The beaker will then placed on the marked paper. Next, the hydrochloric acid will be added to the Na2SO3 (thiosulphate). At this point, the stopwatch will be started, and then the time recorded for the cross to disappear. This will then be done with the concentration of Na2SO3 increasing in measurements of 10ml each time. I will change the ratio of water and hydrochloric acid such as 50:0, 40:10, 30:20, 20:30, 10:40, 0:50. This will allow me to determine what ratio is needed for the reaction to occur quickest (i.e. more acid than water, the faster the reaction rate). As I mentioned in the aim, I intend to find out what effect the concentration of the acid used will have on the rate of reaction between it and thiosulphate. ...read more.

These factors are: the concentration of the hydrochloric acid, the temperature of the hydrochloric acid, the surface area of the marble chips and the mass of the marble chips. The equation for this experiment is: Thiosulphate + Hydrochloric Acid Sodium Chloride + Hydrogen Oxide + Sodium Oxide + Sulphur The Collision Theory states that a reaction occurs when particles collide. Because of this, the concentration of the acid will affect the rate of reaction. This is because changing the concentration will alter the ratio of acid particles to water particles. If the concentration of hydrochloric acid is high, there will be more acid particles in the same volume, meaning that there is a greater chance of the particles colliding with the calcium carbonate particles. An increased chance of colliding means an increased chance of reacting meaning that the rate of reaction would increase. Therefore, decreasing the concentration of hydrochloric acid would have the opposite effect. Having less acid particles would mean that they have a lesser chance of colliding with the calcium carbonate particles. Temperature also affects the rate of reaction. When particles are hotter, they vibrate more as there is more energy (heat) from the surroundings to use. Conversely, when particles are cold, there is less energy that can be used for vibration, resulting in them vibrating slower. For instance, when water molecules reach a certain temperature (100oC), they vibrate so quickly that they vibrate further away from each other, turning the liquid into a gas. ...read more.

In a more concentrated solution, there are more atoms to collide so the reaction time is quicker. My results support the prediction I made because I said 'the greater the concentration of thiosulphate solution, the faster the chemical reaction will take place.' I believe I was correct and a secondary sources from the Internet state that the reaction time will be faster with a more concentrated solution because, 'the more molecules there are, the frequency of successful collisions is greater and therefore the reaction rate is speeded up.' Evaluation: I think that overall, my experiment was a successful one. Although, I think I could've made some improvements, such as I only obtained three sets of results and then worked out an average. To make my average more accurate, I could have done more tests to gain a more reliable average. I think there is also a human error factor involved when you are measuring liquids and looking for an end point in the reaction. Although the reaction I chose had a fairly definite end point, it was still hard to tell whether the whole cross had disappeared or not. Instead of using a cross, a laser, or maybe an interactive quasar beam could be used and when the beam does not make contact with the sensor, that would be the definite end point. A better standard of beaker could also be used, as well as a less contaminated bottle of thiosulphate, as our bottle contained thiosulphate AND hydrochloric acid already. In addition, I also had no anomalous results in my experiment, which only proves that I carried out the experiment properly and correctly. 1 ...read more.