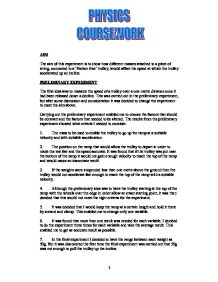 The aim of this experiment is to show how different masses attached to a piece of string, connected to a 'friction free' trolley, would affect the speed at which the trolley accelerated up an incline.

The aim of this experiment is to show how different masses attached to a piece of string, connected to a ‘friction free’ trolley, would affect the speed at which the trolley accelerated up an incline.

The first idea was to measure the speed of a trolley over a one-metre distance once it had been released down a decline. This was carried out in the preliminary experiment, but after some discussion and consideration it was decided to change the experiment to meet the aim above.

1.        The mass to be used to enable the trolley to go up the ramp at a suitable velocity and with suitable acceleration.

2.        The position on the ramp that would allow the trolley to depart in order to make the test fair and the speed accurate. It was found that if the trolley was put near the bottom of the ramp it would not gain enough velocity to reach the top of the ramp and would cause an inaccurate result.

For the duration of the experiment the following apparatus will be used:

1x Plank of wood to act as ‘incline’,

FACTORS THAT MAY AFFECT THE OUTCOME OF THE EXPERIMENT

In the formula F=Ma, the measure of force is in Newton’s, the mass will usually be in grams or kilograms and the acceleration will be measured in meters per second. Newton's second law of motion is more abstract than the first law. The second law includes all acceleration and is very simple to comprehend. Acceleration comes about when a force acts in some direction on a body. The larger the mass of the body, the more force is needed to accelerate it.

Acceleration= the rate of change of velocity with time. You can calculate it using the equation below:

Taking three sets of results on each weight proved that the smart-pulley was dependable because all three of the readings were nearly identical each time. By taking this number of results also ensured that there were not any anomalous results. I can verify this because the line of best fit went through the plotted results on my graph. Plotting a rough graph as I carried out the experiment simplified matters because I was able to keep track of my results and ensure no mistakes were being made.

Given more time I would have repeated the whole experiment and would have taken 5 or more readings of each weight to guarantee that my results were indeed reliable. In conclusion, I am sure that my results show a high degree of accuracy and are dependable enough to draw a reliable conclusion.