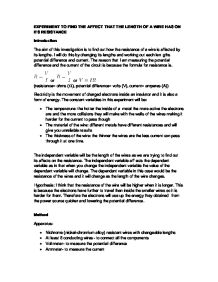 The aim of this investigation is to find out how the resistance of a wire is affected by its lengths. I will do this by changing its lengths and working out each lengths potential difference and current.

Electricity is the movement of charged electrons inside an insulator and it is also a form of energy. The constant variables in this experiment will be:

Hypothesis: I think that the resistance of the wire will be higher when it is longer. This is because the electrons have further to travel than inside the smaller wires so it is harder for them. Therefore the electrons will use up the energy they obtained from the power source quicker and lowering the potential difference.

If I were to do this experiment again I would change a few aspects of it in order to obtain more reliable results and to make it a fairer test. I would keep the current the same although out the experiment by using a rheostat and adjusting the current to the same before every measurement is taken. I would keep the temperature of the room the same so that it does not have any effect on the electrons or the conducting wires. This will make it’s a fairer test because then you are only having one dependant variable which will make the outcome of the dependant variable more reliable.