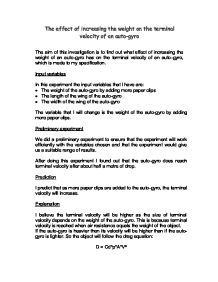 The aim of this investigation is to find out what effect of increasing the weight of an auto-gyro has on the terminal velocity of an auto-gyro, which is made to my specification.

The aim of this investigation is to find out what effect of increasing the weight of an auto-gyro has on the terminal velocity of an auto-gyro, which is made to my specification.

In this experiment the input variables that I have are:

The variable that I will change is the weight of the auto-gyro by adding more paper clips.

After doing this experiment I found out that the auto-gyro does reach terminal velocity after about half a metre of drop.

I predict that as more paper clips are added to the auto-gyro, the terminal velocity will increase.

Where: Cd is the drag coefficient

To do this experiment I will change the weight of the auto-gyro. First I will design and make my auto-gyro to the specification:

I will then use a metre ruler placed against the wall from the ground and use a stopwatch to time how long it takes for the auto-gyro to travel this distance.

When doing this experiment I will have to make sure I drop the auto-gyro from a suitable height so that I can make sure that terminal velocity is reached and it can be seen clearly.

I will repeat this experiment several times to ensure my results are accurate and reliable enough so that I can hopefully notice a trend and prove my prediction.

Once I have obtained these results I will plot them on a graph.

In this experiment I will take the following measurements:

To improve this I would drop the auto-gyro from a higher height such as 4 metres.

I think that my results are quite good and reliable as it showed good trends. The results proved that my prediction was correct.

To do further work I would investigate the length of the wing and see what the effect of the wing length is on the terminal velocity.

To do this I would do the same experiment as this one but instead of adding more paper clips I will just have one and I will decrease the length by 1cm each time.