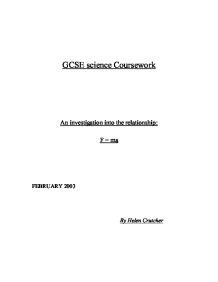 The aim of this investigation is to see what the relationship between force, mass and acceleration is.

An investigation into the relationship:

The aim of the investigation

The aim of this investigation is to see what the relationship between force, mass and acceleration is. We will investigate the law of motion F=ma using a trolley, a runway, light gates and a computer program called a data logger.

Acceleration: Rate of velocity change over a given time.Acceleration can be measured in m/s/s or m/s2 (distance/time/time)

Velocity: Rate of linear motion (in a straight line) of a body in a particular direction. Since it takes into account Direction and the magnitude of the force, velocity is known as a vector. Velocity can be measured in m/s north (distance/time-direction)

Speed:    is a measure of how fast an object is moving, speed is measured in m/s, it is calculated using distance/time. It does not take into account direction and so therefore is not a vector.

The laws of motion

Friction-the resistance force between two surfaces as they pass over one another. The uneven surfaces of the objects (sometimes only microscopic imperfections) cause them to catch against each other creating a resistance force. The force of friction is at its maximum between two objects when they are at rest.

The angle of friction-the angle to which a surface must be raised for objects placed on the surface to begin to steadily slide, thus the force of friction is removed.

In order to investigate this relationship we will vary the force applied to the trolley, this is because force is easy to vary using 100g masses placed on a piece of string run over a pulley whereas, varying the mass of the trolley would involve taping masses to the trolley which would be time consuming. Varying the force also allows us to gain enough measurements to justify our prediction when it comes to drawing graphs

We will use a light gate to measure the acceleration of the trolley; it does this by measuring the length of time between the light being broken by one 3cm wide card prong and it being broken again by another 3cm wide card prong. The computer program the connected to light gate, then calculates the acceleration of the trolley between these two points.

Hypothesis- the relationship between Force, mass and Acceleration will be that the force applied to the trolley is directly proportional to the Mass of the trolley multiplied by its acceleration.

For this to be a fair test and which ones we will measure:

Doing a preliminary experiment is necessary when doing any investigation because it allows us to plan which variables and ranges will be suitable for use, for our actual experiment to give us reliable results. We need, for example to see if putting a force of 10 Newtons pulling the trolley gives us a result that we are able to plot onto a graph.

From the graph we can also see that the gradient is much shallower than we would have predicted for this relationship, this fact means that the mass is being falsely made to seem high due to external factors decreasing the acceleration .These external factors are those such as air resistance and friction.

For my final experiment we have decided, as a result, to counteract friction since it is relatively easy to counter using the angle of friction (as mentioned in background information).

I can now see that for the actual experiment keeping the experiment fair is going to be very important if we are going to have any hope of gaining a reliable experiment from which we are able to draw a conclusion supporting our hypothesis. We will make sure that the trolley is always released from the same point and we will keep all other factors, (excepting those to be measured) controlled as well.

Actual experiment-we will base our conclusion on this experiment.

For this experiment we will take multiple results for each force, five in total. These will allow us to calculate an average, and therefore eliminate some of the problems concerning human error and anomalous results.

The way in which I will counteract friction will be to raise the runway up before we begin until is just before the angle of friction (until it is only just stationary). I will do this using many pieces of card stacked at the end of the runway

Ideally, in order to investigate the experiment in a fairer fashion we would eliminate all counter forces or work out the amount of these forces working against the trolley so that we could work out the overall unbalanced force. This would mean that the mathematical calculations would reliably correspond to Newton’s second law of motion.

In order to make our experiment more accurate we could do more repeats and try to eliminate more of the counter forces working on the trolley. One way of doing this would be to use an air track; this uses an air cushion to eliminate friction, the price we would have to pay for eliminated friction would be air resistance due to the fact that this method uses air.

Where friction is present, Newton's second law can be expanded to:

We have seen already seen that this rule may in fact be true, as previously mentioned. When we looked at our mathematically generated results for our preliminary and actual results we saw that subtracting some of the friction gave us a more realistic result for our mass (as seen previously). Another way we could continue our experimentation into this law of motion would be to look at it from a different perspective, for example, we could vary the trolley mass instead of varying the force, and we could then measure the acceleration. This would mean that we could manipulate these results to check that our hypothesis is correct whichever way you look at the relationship.