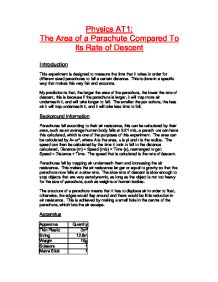 The Area of a Parachute Compared To Its Rate of Descent

The Area of a Parachute Compared To Its Rate of Descent

This experiment is designed to measure the time that it takes in order for different sized parachutes to fall a certain distance.  This is done in a specific way that makes this very fair and accurate.

Speed = Distance ÷ Time.  The speed that is calculated is the rate of descent.

The overall experiment was fairly precise and accurate as far as I can see.  The problems encountered were minor, and there was only one anomalous result.  If I had more time, I would have re-done the experiment at least 10 times in order to get an accurate result from that particular parachute area.  This experiment could also be expanded into more areas than  just parachutes, there are also many types of parachute, such as the parafoil, where it is designed to travel both forwards and down, very efficiently.  This could be compared to the results of the original parachutes or even another further type of parachute.  The parachutes could also be extended, so that they were much larger or much smaller in area than the sizes used in the above experiment.  There are also other areas of study with the same parachutes, so instead of changing the area of the parachute, change the weights on the bottom to 20g or 5g for example.