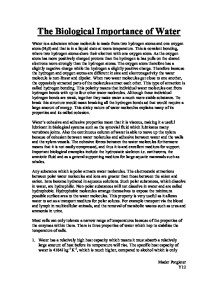 Most cells can only tolerate a narrow range of temperatures because of the properties of the enzymes within them. There is three properties of water which hep to stabilise the temperature of calls. 1. Water has a relatively high heat capacity which means it must absorb a relatively large amount of heat before its temperature will rise. The specific heat capacity of water is 4184J kg-1 K-1, which is much higher, compared to alcohol which is only 2520J kg-1 K-1. This property of water is very useful because our bodies are largely composed of water and 70% - 80% of our cells, are very thermostable, and thus less prone to heat damage by changes in the environmental temperatures. 2. A large amount of heat energy, 2.26 MJ kg-1 K-1, must be absorbed by water turn it into water vapour. Organism can cool down when only a little of their water evaporates. This phenomenon is used extensively by mammals, via sweating, and reptiles, via gaping, and may be important in cooling transpiring leaves. ...read more.

It is used in photosynthesis and digestions. The weakness of individual hydrogen bonds means that individual water molecules continually jostle one another when in the liquid phase. This allows osmosis to take place. Most of the human body is water. Substances with molecules of a similar mass to water, such as ammonia and methane, are all gases at room temperature but water is a liquid. It is the polarity of water molecules and the fact that they can from hydrogen bonds which is the key to water's special properties. It boils at 100�C and melts at 0�C. Water is probably the fundamental reason for life on Earth. Every living thing depends on it to survive which is why water is so important. As well as being essential to life, water also has many other uses. Some of these include being a very good solvent, for washing or even as habitats and environments. Water's abundance and requirements towards life already make it special but there are even more properties of water as a result of the hydrogen bonds between water molecules that make water vital for living things Mader Potgieter Y12 ...read more.