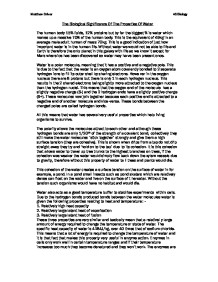 The Biological Significance Of The Properties Of Water.

The Biological Significance Of The Properties Of Water The human body 15% lipids, 12% proteins but by far the biggest % is water which makes up a massive 70% of the human body. This is the equivalent of 49kg in an average male adult human of mass 70kg. This is a good indication of just how important water is in the human life. Without water we would not be able to life and Earth is therefore the only planet in this galaxy with life as we know it except for Mars where ice has been discovered so water may have been present once. Water is a polar molecule, meaning that it has a positive and a negative pole. This is due to the fact that the water is an oxygen atom covalently bonded to 2 separate hydrogen ions to fill its outer shell by sharing electrons. However in the oxygen nucleus there are 8 protons but there is only 1 in each hydrogen nucleus. This results in the 2 shared electrons being slightly more attracted to the oxygen nucleus than the hydrogen nuclei. ...read more.

In a pond small insects such as pond skaters which are relatively dense can float on the water and live on the surface of the water. Without the tension such organisms would have no habitat and would die. Water also acts as a good temperature buffer to stabilise experiments within cells. Due to the hydrogen bonds produced bonds between the water molecules water is given the following properties relating to heat and temperature :- 1. Relatively high heat capacity 2. Relatively large latent heat of vaporisation 3. Relatively large latent heat of fusion These three properties are very similar and basically mean that a relatively large amount of energy required to change the temperature or state of water. The specific heat capacity of water is 4184J/kg, over 40 times that of sodium chloride. This means that a lot of energy is required to change the temperature of water and it is that fact that makes this property very useful in enzyme action. Enzymes in cells only work well in certain temperature ranges and if their temperature increases too much they become denatured and they won't work. ...read more.

This makes the cell more efficient which is important. When water freezes it becomes ice. Most substances become denser when they become a solid but water is at its densest state at 4�C. When it freezes it expands and becomes less dense. In Biology, this provides many arctic animals with a safe habitat under the ice which floats on the surface of the water because it is less dense. Under the ice the animals are protected from some predators and the environment is kept constant and insulated which helps them maintain a constant body temperature. The ice floats on the surface tension of the water and provides other animals with a place to live. If the ice sank to the bottom then the water would freeze from the bottom and eventually there would be no water left and many animals would die. In conclusion, water is very important to human life and all other organisms as it is evident that without it many would become extinct. It is the fact that water is polar and has hydrogen bonds that give it the properties described and it is these properties that make water so indispensable to life as we know it. Matthew Driver AS Biology ...read more.