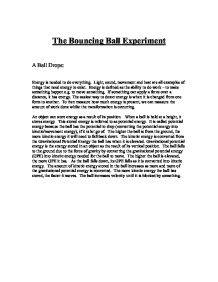 Energy is needed to do everything.  Light, sound, movement and heat are all examples of things that need energy to exist.  Energy is defined as the ability to do work – to make something happen e.g. to move something.  If something can apply a force over a distance, it has energy. The easiest way to detect energy is when it is changed from one form to another.  To then measure how much energy is present, we can measure the amount of work done whilst the transformation is occurring.

One set of electronic scales

*There must also be access to a staircase that rises to at least five cm (500cm) from the ground.

A tape measure was used to measure where on the stairs the height we desired from floor to staircase was.  We found where we should stand on the stairs for measuring all the heights from 50cm to 500cm with 50cm gaps in-between each.  Next, the ping-pong ball was measured and weighed so that when it came to doing energy calculations relating to kinetic energy or work done (energy transfer), I would be able to put numbers into them, and form conclusive results.  Two metre rulers were stood on top of each other in front of the 50cm mark and held firmly in place by two people so that they were not slanting or leaning against the staircase. The ping-pong ball was taken to the place on the staircase we had measured to be 50cm from the ground.   The ball was dropped from this height alongside the metre rulers with no force exerted on it.  A different person standing on the ground directly in front of the metre rulers noted the height of the bounce.  This was done three times and an average bounce height for a 50cm drop height was found.  The whole experiment was then repeated using different drop heights of 100cm, 150cm, 200cm, 250cm, 300cm, 350cm, 400cm, 450cm and 500cm. The same person dropped the ping-pong ball each time and the same person noted the bounce height each time.  The same ping-pong ball was used for each experiment.  For each drop height, an average was found and the results recorded.

I had enough evidence that I could study to work out why my graph was a curve instead of a straight line.  I also feel that I had enough evidence to back up my conclusion.  All my results did follow a pattern.  I didn’t have any unexplainable results because I took enough tests and averages to even out any slight glitches in the pattern.