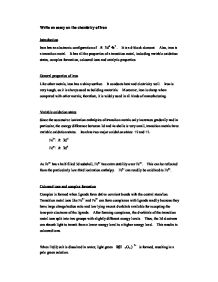 the chemistry of iron

For example, Fe(III) ions react with cyanide CN(aq) to give a deep blue complex . Reactions of Fe(II) compounds 1.Oxidation Fe2+ is a reducing agent and it can be oxidized by common oxidizing agents like KMnO4, conc. HNO3, etc. As mentioned before, Fe(III) is more stable than Fe(II). Thus, nearly all compounds of Fe(II) can be oxidized readily to Fe(III) in air. 2. Precipitation with hydroxide Fe2+ reacts with OHto give green gelatinous Fe(OH)2(s), which quickly undergoes further oxidation to give brown Fe(OH)3(s). 4Fe(OH)2(s) + O2(g) +2H2O(1)4Fe(OH)3(s) 3. Hydrolysis When dissolved in water, Fe2+ undergoes hydrolysis to give a slightly acidic solution. 4. Complex formation Other than forming complex with water, Fe2+ can also form complex with CN(aq) to give pale yellow . Reactions of Fe(III) compounds 1. Reduction Fe3+ can be reduced by strong reducing agents like Zn, I 2. Precipitation with hydroxide Fe3+ reacts with OH to give brown gelatinous Fe(OH)3(s) which does not dissolve in excess NH3(aq) or NaOH(aq). 3. Hydrolysis Fe3+ undergoes extensive hydrolysis to give a very acidic solution. ...read more.

Due to the presence of impurities, non-uniform packing of atoms and non-uniform thickness of water film, some regions of the piece of iron would become more readily oxidized (the anodic region), while at other regions (the cathodic region), reduction of oxygen is more likely to occur. With the presence of anodic and cathodic regions, redox reaction would occur. At anode: Fe(s) Fe2+(aq) + 2e At cathode: O2(g) + 2H2O(1) + 4e4OH(aq) The iron(II) ions formed react with hydroxide ions to give Fe(OH)2, which is immediately oxidized by air to give Fe(OH)3(s). Overall: Rate of rusting is increased by the presence of acids or other electrolytes, high temperature, contact with metals less reactive than iron and the presence of bent or sharp region in the piece of iron. Reactions of iron Iron shows all typical properties of metals. Iron reacts with dilute acids to give hydrogen. e.g. Fe(s) + 2HCl(aq)Fe2+(aq) + 2Cl(aq) + H2(g) Iron is a strong reducing agent. e.g. iron can reduce copper (II) ion to copper. Fe(s) + Cu2+(aq)Cu(s) + Fe2+(aq) ...read more.

Overall an exemplary essay piece. The introduction is neatly set out, covers the basics of iron as an element and mentions what the main topics of conversation are that the writer is going to cover. The essay also uses ...

Overall an exemplary essay piece. The introduction is neatly set out, covers the basics of iron as an element and mentions what the main topics of conversation are that the writer is going to cover. The essay also uses correct scientific chemical formula for the equation. The response to the question covers all the main properties of ion with an in depth and very clearly presented chemical essay presented to a high standard.

The layout and analysis of this essay is one that goes beyond GCSE knowledge in complexity. The writer also links the properties of ion with its uses which shows thinking outside the box. The depth of the essay and the clear explanations of variable oxygen states is one I would expect from an A level student. The essay covers a wide range of view points in great chemical depth.