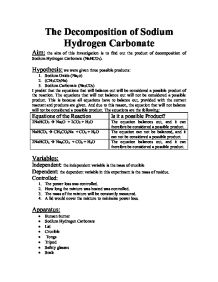 The Decomposition of Sodium Hydrogen Carbonate

So we know that Sodium carbonate is the product of the decomposition of Sodium Hydrogen Carbonate. Conclusion: After having carried out the experiment, and examined the results, I have found out that my hypothesis was correct. I predicted that only two of the given products, could be possible products. This is because their equations balanced out, and the equation of the third one did not balance out. So it could not be considered a possible product. Evaluation: The experiment went smoothly, and accurate results were collected, however some changes could be done if the experiment was carried out again. One of the changes would be more accurate mass measurement. This could have been done by measuring the mass of the variable three times, and then averaging the result. This would have given us more accurate masses, since the masses are key factors in obtaining the product. Another change would be the time taken to measure the crucible. We could set a three minute break after each five minute heating. By doing that the heat that was lost by the mixture could be kept constant the whole time. We also started heating the mixture without a lid on top of our crucible, which caused in the loss of powder. ...read more.