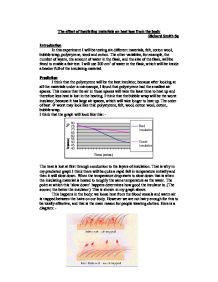 The effect of insulating materials on heat loss from the body

The effect of insulating materials on heat loss from the body Richard Smith 5? Introduction In this experiment I will be testing six different materials, felt, cotton wool, bubble wrap, polystyrene, wool and cotton. The other variables, for example, the number of layers, the amount of water in the flask, and the size of the flask, will be fixed to enable a fair test. I will use 200 cm3 of water in the flask, which will be inside a beaker full of the insulating material. Prediction I think that the polystyrene will be the best insulator, because after looking at all the materials under a microscope, I found that polystyrene had the smallest air spaces. This means that the air in those spaces will take the least time to heat up and therefore less heat is lost in the heating. I think that the bubble wrap will be the worst insulator, because it has large air spaces, which will take longer to heat up. The order of best --> worst may look like this: polystyrene, felt, wool, cotton wool, cotton, bubble wrap. I think that the graph will look like this: - The heat is lost at first through conduction to the layers of insulation. That is why in my predicted graph I think there will be quite a rapid fall in temperature initially and then it will slow down. When the temperature drop starts to slow down that is when the insulating material is heated to roughly the same temperature as the water. ...read more.

Here is the graphs of the two experiments I carried out and the average temperature drops for them: - As you can see from the bar graph wool was the best insulator as it has the lowest temperature drop. After looking at each material again under the microscope, I can see that wool has very small air spaces inside the material. This is a property of a good insulator because the small air spaces take less time to heat up, and therefore do not loose as much energy in the heating. Also from the bar graph; my predicted best insulator was in fact the worst. This may have happened because the polystyrene is the least flexible of the insulators and although the material itself may have small air spaces, there were a lot of large air spaces in between each piece of polystyrene. Whereas the wool could be wrapped around the beaker, leaving much smaller gaps. These larger air spaces will have taken a lot longer to heat up and used more energy: causing the water to cool quicker. The general pattern for each test was that the temperature would drop at the start, then at about 4 minutes the good insulators began to maintain their heat more and the bad insulators continued to drop. The insulators were in this order, (best --> worst): wool, cotton wool, felt, bubble wrap, cotton, polystyrene. This happened because of the trapped air inside each of the materials. ...read more.

There were very few anomalous results however; they were most probably wrongly read from the thermometer. Here is a list of the anomalous results: - * Polystyrene test 1: 77.50C - 15 minutes * Polystyrene test 2: 73.50C - 19 minutes * Wool test 2: 66.50C - 12 minutes These were excluded from the graphs. There were, however, a few things that did go slightly wrong. For example, my prediction that polystyrene would be the best insulator may not have been very fair. In that, the other materials were wrapped around the flask, but this is not possible to do with the polystyrene pieces we were given. This could have been over come by doing one of two things: Either using polystyrene granules or a block that could have been fixed around the flask; or all the materials could have been shredded to allow me to test the air spaces in the material itself (however, in shredding the insulators, it may alter the air spaces and so make it an unrealistic test). Another thing that might have distorted the results was the starting temperatures of the water. This could have made the test unfair. The higher the starting temperature, the more energy it will have and therefore it uses more heat in warming up the insulators (as the insulator will only stop taking heat from the water when it is the same temperature). The experiment could have been taken further by being made slightly more relevant to the question if the range of insulating materials were made to include some more fabrics that people would actually wear. For example: nylon, polyester, viscose or Lycra. ...read more.