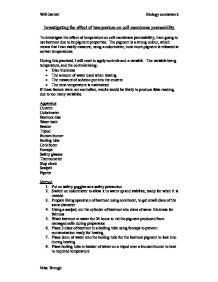 the effect of temperature on membrane permeability

Investigating the effect of temperature on cell membrane permeability To investigate the effect of temperature on cell membrane permeability, I am going to use beetroot due to its pigment properties. The pigment is a strong colour, which means that I can easily measure, using a colorimeter, how much pigment is released at certain temperatures. During this practical, I will need to apply controls and a variable. The variable being temperature, and the controls being: * Disc thickness * The amount of water used when heating * The measure of solution put into the cuvette * The time temperature is maintained If these factors were not controlled, results would be likely to produce false reading, due to too many variables. Apparatus Cuvette Colorimeter Beetroot disc Water bath Beaker Tripod Bunsen burner Boiling tube Cork borer Forceps Safety glasses Thermometer Stop clock Scalpel Pipette Method 1. Put on safety goggles as a safety precaution 2. Switch on colorimeter to allow it to warm up and stabilise, ready for when it is needed 3. Prepare living specimen of beetroot using core borer, to get small discs of the same diameter 4. ...read more.

Exy is Ex multiplied by Ey (20*98)+(35*94)+(45*81)+(55*75)+ (65*59)+(75*27)+(85*17)+(95*16) i.e.: the temperature multiplied by the result. Sxx = Ex2 - (Ex)2 /number of results i.e.: 8 Syy = Ey2 - (Ey)2 /number of results i.e.: 8 Sxy = Exy - ((Ex)(Ey) /8) The PMCC demonstrates that the results show a very strong positive relationship between temperature and light transmission. Likewise, the graph also shows a positive correlation - a pattern that quickly became apparent early in the investigation. As the results show more beetroot pigment can leak out at higher temperatures, I can construe that cell membrane becomes more ruptured as temperature increases. This brings me to conclude that in beetroot, as temperature increases, light transmission decreases. This means that the more betalaine (beetroot pigment) is released at higher temperatures, making the solution more concentrated, allowing less light transmission. Why use a colorimeter? A colorimeter entails a light source, a filter to select the most appropriate wavelength, a photocell to interpret the light intensity and a digital display. A colorimeter gives the percentage of light which can pass through the solution. The most suitable filter to use can be selected by choosing the one with the closest colour to match that of the solution being tested. ...read more.

Marginal variance regarding temperature may have caused small anomalies, as seen in the table for test 1 (85 oc, 14%). Another problem which would have proved to have affected the results is the technique by which the beetroot discs were cut. The discs were hand cut, which means that they are not all of uniform size. For this reason, the amount of pigment in each disc will not be consistent either. A natural variation of the pigment contained in each disc will influence my results further. If one disc of beetroot contains more pigment than the next, then the experiment would not have been a fair one. My tests where consistent, with one exception which was rectified when repeated. This suggests that my method had a dependable output. The use of a colorimeter provided consistency and accuracy over a visual colour check. I can conclude this because the line of best fit on the graph is predominantly smooth. However, I believe the reliability and precision of data has proved adequate to support my conclusion that as temperature increases, light transmission decreases. The limitations noted were minimal in regard to the resources available. Overall, I believe that they didn't greatly corrupt the expected trend. ?? ?? ?? ?? Will Garratt Biology coursework Miss. Brough ...read more.