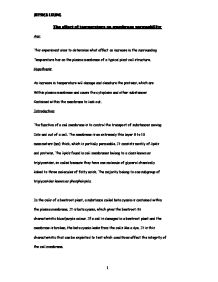 The effect of temperature on membrane permeability

The effect of temperature on membrane permeability Aim: This experiment aims to determine what affect an increase in the surrounding Temperature has on the plasma membrane of a typical plant cell structure. Hypothesis: An increase in temperature will damage and denature the proteins, which are Within plasma membrane and cause the cytoplasm and other substances Contained within the membrane to leak out. Introduction: The function of a cell membrane is to control the transport of substances moving Into and out of a cell. The membrane is an extremely thin layer 8 to 10 manometers (nm) thick, which is partially permeable. It consists mostly of lipids and proteins. The lipids found in cell membranes belong to a class known as triglycerides, so called because they have one molecule of glycerol chemically linked to three molecules of fatty acids. The majority belong to one subgroup of triglycerides known as phospholipids. In the cells of a beetroot plant, a substance called beta cyanin is contained within the plasma membrane. It is beta cyanin, which gives the beetroot its characteristic blue/purple colour. If a cell is damaged in a beetroot plant and the membrane is broken, the beta cyanin leaks from the cells like a dye. ...read more.

With the use of green filter, green light will only be absorbed and the red colour of beta cyanin would reflect. 13. Calibrate the colorimeter using distilled water as a blank and then take the reading of your 7 solutions in % absorption units. Use the same colorimeter tube for all the 7 readings. Results Temperature �c % of absorption 70 0.28 60 0.20 50 0.12 40 0.07 30 0.06 24 0.08 -5 0.45 Conclusions: After collecting and correlating the results, I have come to the conclusion that the experimental hypothesis is correct in that an increase in temperature will damage and denature the plasma membrane and cause the cytoplasm and other substances contained within the membrane to leak out. This has been shown by a steady decrease in beta cyanin leaked out of plant cells as the temperature increases referring to the % of absorption. The graph can be analysed into three parts, first part there is a rapid decrease of the % of absorption from -5�c to 24�c which is the room temperature. From the data that are shown beetroot has the darkest % of absorption at -5�c . ...read more.

The other difficult variable to maintain was the temperature of the heated water. With only basic equipment, keeping the water at the correct temperature was made a complicated task, besides the effect of temperature between -5 �c to 24�c were not carried out hence the graph is not in great deal of accuracy. There are also some percentage error in the equipments that are used, such as measuring cylinder, which it is an error with 0.1cm. A pipette should be replace in order to achieve more accurate results. External variables were well controlled. If the experiment was to be repeated, the use of a proper controlled water bath may be a consideration, and also a template made for cutting the beetroot pieces. Using a beetroot as the sample is not a good representation of the whole eukaryote group. Other cell membranes may have better or worse heat tolerance, some may not be affected at all, however, using a beetroot does give a good representation of the theories behind the plasma membrane and how it behaves. For further work, we are alter the controlled and key variables of varies experiment, such as using different concentration of alcohol, since alcohol can break down lipids that are within the cell surface membrane, which will also should the effect of alcohol on membrane permeability. Jessica Leung 1 ...read more.