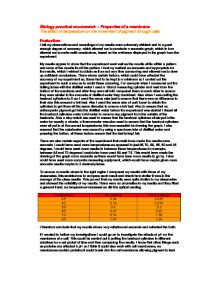 The effect of temperature on the movement of pigment through cells.

Biology practical coursework - Properties of a membrane The effect of temperature on the movement of pigment through cells Evaluation I felt my observations and recordings of my results were extremely efficient and to a good enough degree of accuracy, which allowed me to conclude n accurate graph, which in turn allowed me to make solid conclusions, based on the evidence displayed in the graph from the experiment. My results appear to show that the experiment went well as the results all lie within a pattern and none of the results lie off the pattern. I feel my method as accurate and appropriate for the results, which I wished to obtain as it as not very time consuming and allowed me to draw up sufficient conclusions. There where certain factors, which could have affected the accuracy of my experiment so, these had to be kept to a minimum so I carried out the experiment in such a way as to avoid these occurring. ...read more.

Also a stop watch ass used to ensure that the beetroot cylinders all stayed in the water for exactly a minute, a thermometer was also used to ensure that the beetroot cylinders were all put in at the correct temperatures, this was essential for drawing the graph. I also ensured that the colorimeter was zeroed by using a specimen tube of distilled water and pressing the button, all these factors ensure that the test is kept fair. There are also certain aspects of the experiment that could have made the results more accurate. I could have used more temperatures as opposed to just 85, 70, 60, 55, 50 and 45 degrees, I could have used more results in between these temperatures for example, between 85 and 70 degrees I could also have used 80 and 75. ...read more.

If I wanted to further my investigations I could go on to investigate the effects of pH on the membrane of a cell. This could be carried out b putting the beetroot cylinders in different solutions for a set period of time and then comparing the results, I know that other things such as proteins are effected b pH so I think it could also work with cell membranes, as membranes contain proteins it could break don the cell membrane allowing pigment to leak out. I could also try the experiment on other vegetables to see if the temperature had the same effects on their membranes and if it is a general trend or not. So I conclude that the higher the temperature is the more anthocyanin pigment leaks from the beetroot cell via the membrane. ...read more.