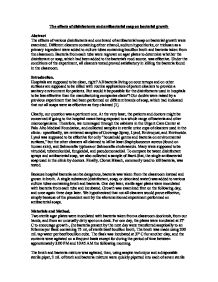 The effects of disinfectants and antibacterial soap on bacterial growth

The effects of disinfectants and antibacterial soap on bacterial growth Abstract The effects of various disinfectants and one brand of antibacterial soap on bacterial growth were examined. Different cleaners containing either ethanol, sodium hypochlorite, or triclosan as a primary ingredient were added to culture tubes containing bouillon broth and bacteria taken from the classroom. Bacteria from each tube were regrown on agar plates to determine whether the disinfectant or soap, which had been added to the bacteria's rood source. was effective. Under the conditions of the experiment, all cleaners tested proved satisfactory in killing the bacteria found in the classroom. Introduction. Hospitals are supposed to be clean, right? All bacteria living on countertops and on other surfaces arc supposed to be killed with routine applications of potent cleaners to provide a sanitary environment for patients. But would it be possible for the disinfectants used in hospitals to be less effective than the manufacturing companies claim'? Our doubts were raised by a previous experiment that had been performed on different brands of soap, which had indicated that not all soaps were as effoctive as they claimed [1]. Clearly, our question was a pertinent one. At the very least, the patients and doctors might be concerned if going to the hospital meant being exposed to a whole range of bacteria and other microorganisms. Therefore, we rummaged through the cabinets in the Urgent Care Center at Palo Alto Medical Foundation, and collected samples in sterile urine cups of cleaners used in the clinic.- specifically, we retrieved samples of Coverage Spray, Lysol, Enviroquat, and Envirocide. Lysol was supposed to be effective for only "household germs and bacteria on environmental surfaces," but the other cleaners all claimed to kill at least Staphylococcux aureus (found on human skin), and Salmonella typhosa or Salmonella choleraesuis. Many were supposed to be virucidal, tuberculocidal, fungicidal, and pscudomonacidal. To compare between disinfectant sprays and antibacterial soap, we also collected a sample of Bacti-Stat, the single antibacterial soap used in the clinic by doctors. ...read more.

Finally, triclosan is commonly used in antibacterial soaps: besides being the active ingredient found in Bacti-Stat, it is also present in certain commercial brands of antibacterial soap, like Jergens and Softsoap. The results we obtained seemed to disprove our hypothesis that not all disinfectants are created equal. However, our conclusion was not a definite one. For one, the antibacterial soap and disinfectants used in the experiment are generally lathered on the hands and rinsed off quickly, or sprayed on to a surface and wiped off almost immediately. Already, our experiment differed from normal circumstances in two ways: method of application, and duration of time for cleaner to work. First of all, we added the disinfectant to the bacteria's food source, the broth, so the bacteria were essentially ingesting the disinfectant. Normally, the cleaner is applied to a surface on which bacteria arc dwelling, but the bacteria arc not fed the disinfectant, as in our experiment. Second of all, we allowed the cleaners to work for 24 hours. Even assuming that they all remained potent for the entire time, this would stray from normal conditions, in which the cleaner is applied and then almost immediately removed. (10% bleach is allowed 15 minutes to do its job.) Moreover, bleach disintegrates fairly rapidly after usage, breaking down almost entirely to salt water. Thus, if the other disinfectants remained potent, they might have had an advantage over the bleach because they had 24 hours to work, while bleach had only the short time before it broke down. Of course, the disinfectants are probably designed to kill bacteria almost immediately (otherwise, people would be instructed to let the cleaner sit on the surface for a period of time before wiping it off). However, because we are testing the disinfectants and their claims, we cannot make the assumption that it is 100% effective immediately, upon application. Therefore, a possible variation of this experiment would be to spray the disinfectants on, like they were meant to be applied. ...read more.

*****
A very detailed account of an investigation in which it is difficult to control variables. A good understanding of sources of error shown in the discussion.