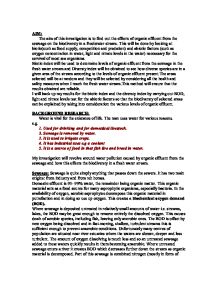 The effects of organic effluent from the seweage on the biodiversty in a freshwater stream.

AIM: The aim of this investigation is to find out the effects of organic effluent from the seweage on the biodiversty in a freshwater stream. This will be done by looking at biotic(such as food supply, competition and predation) and abiotic factors (such as oxygen concentration in water, light and nitrate levels in the water) neccessary for the servival of most sea organisms. Biotic index will be used to determine levels of organic effluent from the seweage in the fresh water stream and Diversty index will be obtained to see how diverse species are in a given area of the stream according to the levels of organic effluent present.The areas selected will be at random and they will be selected by considering all the health and safety measures when I reach the fresh water stream.This method will ensure that the results obtained are reliable. I will back up my results for the biotic index and the diversty index by carrying out BOD, light and nitrate levels test for the abiotic factors so that the biodiversty of selected areas can be explained by taking into consideration the various levels of organic effluent. BACKGROUND RESEARCH: Water is vital for the existance of life. The man uses water for various reasons. e.g. 1. Used for drinking and for domestical livestock. 2. Seweage is removed by water. 3. It is used to irrigate crops. 4. It has industrial uses e.g a coolant 5. It is a source of food in that fish live and breed in water. My investigation will revolve around water pollution caused by organic effluent from the seweage and how this effects the biodiversty in a fresh water stream. Seweage: Seweage is quite simply anything that passes down the sewers. It has two main origins: from industry and from teh homes. Domestic effluent is 95- 99% water, the remainder being organic matter. This organic material acts as a food source for many saprophytic organisms, especially bacteria. ...read more.

Decomposition of these dead organisms by saprophytic bacteria creates considerable BOD resulting in deoxygenating of all but the upper layers of water. As a result the aerobic life in the lower regions dies.) See detail in: Eutrophication by sewage under prediction 5. The collected sample will be placed in a tray and observed. The results will be recorded and the table will be constructed once the sample has been observed according to the species present in the fresh water stream. 6. The biodiversty index will be drawn from the species collected to indicate the levels of pollution caused by the organic effluent from the sewage in the stream. 7. The diversty index would also have been calculated to determine whether the different levels of organic effluent from the stream have had any effect on the biodiversty of the species at a given site. However due to time limitations and the limited knowledge about the organisms in the stream this will not be carried out. 8. Checking out the abiotic factors of oxygen concentrations, light availability, and pH, nitrate levels and turbidity affecting the fresh water stream will prove the results for biotic index. 9. Oxygen concentration will be measured by using an oxygen meter at all selected site. This will allow me to make comparison between the three sites and link the results obtained with the level of organic effluent and draw a logical conclusion about how this links with the biodiversty of the organisms at those sites. 10. The bacterial breakdown of sewage releases nitrates. Nitrates are more soluble in water and since they are important for plant growth are much more of a hazard as pollutants. These may be converted into ammonia by most bacteria in the organic effluent. Ammonia is toxic and may lead to a lower biodiversty in the water stream near the sewage. Hence a nitrate indicator will be used to check for the presence of nitrates in the fresh water stream and support my hypothesis. ...read more.

Raised pond our control had fresh water and low level of eutrophication and had the most organisms living in it due to less organic effluent in it. It had the highest biotic index score of 4.38. On the other hand lagoon3 being the most polluted had a low biodiversty (biotic index score of 3.3 only) due to high level of eutrophication. Whereas Ashby was moderately polluted and hence the eutrophication level was more then that of raised pond but less then lagoon 3 hence it had a moderate number of organisms surviving giving it a biotic-index score of 3.73. I fully agree with my hypothesis and conclusion made in the light of the results received as mentioned above. However I didn't carry out the test for heavy metals and oil and what other substances had incorporated the organic effluent in the selected sites. So may be I ignored an important factor of where the salts, nutrients in the sewage came from and whether or not they can be reduced and even it what extent they were harmful and hence we don't know whether my research could have just been a waste of time. If was to repeat the same investigation again I will take care of the mistakes made trying to reduce anomalous results above and investigate further topics like diversty index and BOD which I was unable to do due to time limitations. Further abiotic factors would be considered over a long period of time to elaborate on how seasonal variations bring a change in the flow of water and hence in abiotic factors associated with such changes. The type and number of organisms may also change giving a different biotic index score for each site due to increased competition, predators, preys or improved vegetation etc. Limiting factors for the experiments can also be controlled if possible by getting the most precise equipment to save time, for example. This would be vital to for the improvement, reliability and accuracy of the results obtained for my research. ...read more.