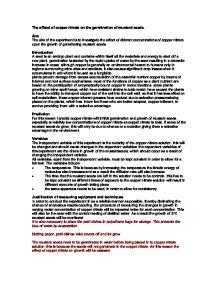 The effetct of copper nitrate on the germination of mustard seeds.

The effetct of copper nitrate on the germination of mustard seeds. Aim The aim of the experiment is to investigate the effect of diferent concentrations of copper nitrate upon the growth of germinating mustard seeds. Introduction A seed is an embryo plant and contains within itself all the materials and energy to start off a new plant. germination is started by the rapid uptake of water by the seed resulting in a dramatic increase in mass. although copper is generally an environmental hazard to humans only in regions surrounding mine sites and smelters, it also causes significant crop losses when it accumulates in soil where it is used as a fungicide. plants prevent damage from excess accumulation of the essential nutrient copper by means of internal and root surface mechanisms. most of the functions of copper as a plant nutrient are based on the participation of enzymatically bound copper in redox reactions. some plants growing on mine spoil heaps, which have resistent strains to toxic metal, have caused the plants to have the ability to transport copper out of the cell into the cell wall, so that it has less effect on cell metabolism. ...read more.

It is also necessary to place the petri dishes in polystirene bags for storage. This prevents the loss of water by evaporation. blotting paper, petri dishes- take covers off and let grow The mustard seeds need to be germinated in water before being placed in to copper nitrate solution. this is because the seeds will not germinate in the copper nitrate. for this reason the effect of copper nitrate on growth will be assesed. a range from 0.1 - 0.02 syringe- can measure small quantities of solution. Preliminary Work The range of concentrations of copper nitrate which will be investigated was needed to be found. initial tests were carried out on three different concentrations of copper nitrate. 1 molar solution, 0.5 molar solution, and 0.1 molar solution. it was obsereved that there was no growth of all three types of seed; mustard, mung and cress. however at 0.1 molar solution the casing of the mung and mustard split open. this led to the investigation of the effects of waeker concentartions o growth and germination. Further tests were carrdied out. it was decided that the mustard seeds was most suitable. For the investigation as the stages in growth and germination were more visible. ...read more.

Repeat this twice. 3) Place the lids on the petri dishes and place the three petri dishes labelled (a) in a polystirene bag and seal the bag. Do the same for (b)-(f). 4) After 23 hours remove the petri dishes and measure the length of the ........ and height. Record these measurements and for each soution calculate the average lenghts of the ........ confidence limit bit....';n sjdh However water is mainly absorbed through the roots, which are covered in specially adapted root hair cells, with large surface areas and thin cell walls to aid absorption by osmosis. Osmosis is the flow of water molecules by diffusion through a partially permeable membrane from areas of high water potential (low solute concentrations) to regions of low water potential (high solute concentrations). All plant cell membranes are partially permeable, which means they allow some some substances to penetrate them but not others. Whether water enters the cell by osmosis will depend on the balance between external and internal solute and water potentials. It could be seen that the plants could have grown more at lower concentrations of sloute as the the water potential outside the seedling is more positive meaning that water will move into the seedling due to the water potential gradient, untill a point where the cell becomes turgid. ...read more.

**
This is unfortunately an unfinished piece of coursework as it includes no results, analysis,interpretation or evaluation.
The planning needs to pay more attention to the controlled variables such as type of seed, temperature and light and be much clearer on the details of the experimental method.
Although examiners are not usually marking spelling, punctuation and grammar in all sections of a report it does make it easier to read and identify the key marking points. This report has many errors in key scientific words and lacks capital letters for nearly every sentence. It would be helpful to spell check and grammar check any coursework before submitting it if you are aiming for the highest grades.